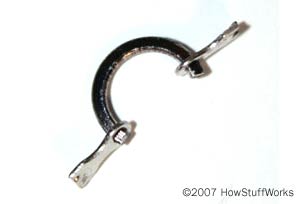 Early cell-phone implant prototypes had functioning screens made from organic light-emitting diodes (OLEDs) implanted in the back of the hand. However, this system had a number of drawbacks:

Developers rejected the idea of a stand-alone, non-implantable screen on the grounds that it kept the phone from being a true implant. It also eliminated one of the implant's major benefits. With a stand-alone screen, people still had a component that they had to carry around and could potentially forget or lose.

In the end, developers decided to make the implant's speaker take the place of the screen. The custom-fitted speaker is a thin crescent of piezoelectric transducers, or objects that change their shape when exposed to electrical impulses. It fits inside the wall of the ear canal and stimulates the skin near the tympanic membrane, or eardrum. The eardrum picks up these vibrations, and the user's brain interprets them as sound.

The speaker, like the accelerometer, relies on a lookup table located in the ROM to provide audible feedback to the user. For example, when a person makes the gesture for "eight," the processor uses one lookup table to interpret the gesture and another to determine which sound to play. Then, speaker plays the word "eight." This allows the implant to audibly confirm each of the user's gestures, cutting down on misdialed numbers and other errors. The piezoelectric speaker also relays the other end of the conversation to the user.

In order to cut down on processor and memory requirements, the device relies on recorded responses rather than text-to-speech technology. The implant's ROM comes pre-loaded with:

The ROM chips, along with the other integrated circuits used in the implant, look a lot like the ones you'd find in a typical cell phone. The RF transmitter and receiver, processors and analog-digital converters are all small, relatively flat chips that attach directly to the flexible circuitry. The most noticeable difference is that these chips are often somewhat rounded rather than completely square or rectangular. This makes them less obtrusive and more comfortable under the skin.

The edges of many cell-phone implant components are rounded rather than completely square.

For the most part, these components aren't noticeable. They don't rub against eyeglass earpieces or snag on hair. However, two components can cause difficulties for people who wear earrings. The implant's microphone rests just under the skin in the lower portion of a person's earlobe. An earring's weight pushes on the microphone, making it visible through the skin and causing discomfort. The implant's antenna is a wire that matches the curve of the auricle, or the outer portion of the ear. Some users find that earrings worn along the auricle become uncomfortable after implantation, especially if they rub against the skin above the antenna.

The antenna of a cell-phone implant fits along the auricle of the ear.

Next, we'll look at the battery power that keeps this system running.