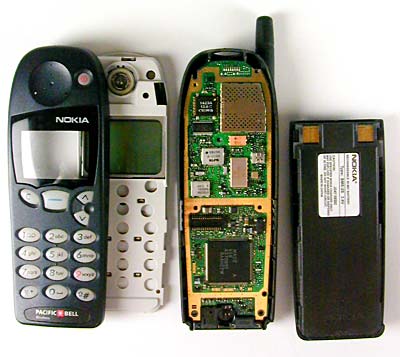 If you remove a cell phone's plastic exterior, you'll find all kinds of electronic components inside. Numerous chips and devices attach to a printed circuit board. These include:

Some models have GPS and Bluetooth receivers. Many new phones also have built-in digital camera lenses and sensors, as well as storage space for pictures and videos. Some phones even have the circuitry and storage space required to store and play MP3s. The more parts there are and the more impressive the phone's capabilities, the larger and stronger the phone's battery has to be. In many cell phones, the battery as almost as large as the printed circuit board it powers.

Combined, the circuit board, its components and the battery make up about half of the phone's bulk. The rest comes from the screen, the keys and the outer plastic case. Since an implant has to be much smaller than a traditional cell phone, a good first step in making one is getting rid of these three elements. For this reason, a cell-phone implant does not have a typical user interface (UI). It uses the person's body instead.

Taking the place of a keypad is a six-axis piezoelectric accelerometer attached to the angle of the mandible, or the jawbone. This accelerometer can detect when the jaw opens and closes or moves from side to side. Since the jaw moves along with a person's head, the accelerometer also detects head movements. It does this using crystals that create electrical pulses when they change shape. You can read How the Nike + iPod Works to learn more about these crystals.

After receiving the cell-phone implant, the user learns a series of head and jaw gestures that control the phone. This is similar to the stylus shorthand used with older PDAs. It's also a little like sign language, but it uses the head and jaw instead of the hands. Before beginning a gesture, the user touches a small on/off switch located on the mastoid process, a bony protrusion on the skull just behind and below the ear. This lets the implant know to be ready for the user's input and prevents it from mistaking ordinary conversation or movement for gestures. The user can also turn the implant completely off by holding the switch down for three seconds.

The modules of a cell-phone implant are inserted under the skin and in the jaw.

During a gesture, a flexible circuit and conductive ink carry the accelerometer's electrical impulses to the implant's microprocessor, located on the back of the ear. This processor, made of a flexible thin-film transistor, is a custom-fitted piece that lies precisely along the cartilage in the back of the ear. The processor uses a lookup table stored on a nearby ROM chip to match a person's movements with the cell phone's commands. If a person makes the gesture for "four," the processor finds the corresponding pattern of electrical impulses in the lookup table. It then holds the number four in a memory buffer until all of the gestures are complete. An implanted radio frequency (RF) transmitter sends the data using radio waves. This data moves just like ordinary cell phone data -- check out How Cell Phones Work to learn about the process.

The keyboard is just one part of a cell phone's typical user interface. Learn how cell-phone implants get by without a screen in the next section.

Thin-film Transistors and Is This For Real?

If your current cell phone has an LCD screen, it probably uses thin-film transistors (TFTs) to power its pixels. The TFTs used in cell-phone implants are a little different, though. The TFT in an LCD screen is under a pane of glass, so it's rigid. The TFTs used in cell-phone implants, on the other hand, are attached to flexible film. This technology, developed by the U.S. Air Force research lab, was originally intended to provide soldiers with flexible, wearable displays.