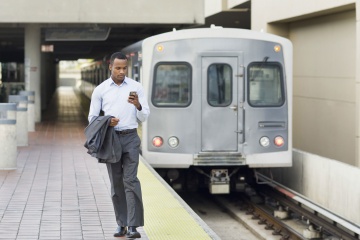 Many commuters stroll along the train platform with their attention on their smartphone screens, but there’s risk in neglecting awareness of your surroundings.
© Kevin Dodge/Corbis

The number of cell phones in use in the world hit the 6 billion mark in 2011 [source: ITU]. We're using them for text-based communication more and more, and given human nature, it's not all that surprising that we are not always doing so in a wise manner.

You see it every day, and you might even be guilty of it yourself. People are walking while staring intently at their phones, texting their friends, sending e-mails or reading social media sites rather than paying attention to the sidewalks, roads or other pedestrians around them. Sometimes they bump into people, walk into street signs or worse. There have been a few highly publicized incidents recently. A person in Pennsylvania fell into a mall fountain while texting, and video of the incident received over 4 million hits on YouTube. Another in Melbourne, Australia walked off a pier while Facebooking and had to be rescued from frigid water by emergency personnel. A man texting in the Los Angeles suburbs walked dangerously close to a bear that was wandering his neighborhood before he noticed it and ran away. A woman in New York fell onto the subway tracks and was actually struck by a train. Thankfully, the victims in all of these cases survived, but not everyone has been so lucky. Deaths among pedestrian teens are up, and distracted strolling may be why [source: Davies].

The obvious solution: Don't look at mobile devices while walking. But many people seem unable to resist the siren song of constant connectivity. One potential solution to the problem is Apple's Transparent Texting. It's not yet a reality, but the company filed a patent in 2012 that was made public by the U.S. Patent and Trademark Office in March 2014. It shows a functionality that could let you continue to stare at your phone while simultaneously remaining aware of what's in front of you -- or at least in front of your phone. There are actually similar apps already in existence. But are they necessary?