by Stephanie Crawford
Prev NEXT
5

Create Dimension by Lighting from the Side 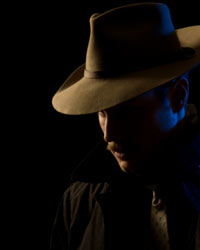 Film noir photos don't have to be black and white. This photo uses side lighting to create dramatic shadows that are unmistakably film noir, even though it's a color shot.
©iStockphoto/Thinkstock

Lighting a film noir scene involves more than just adding light to the subject. In film noir, lighting is used to create shadows and give the viewer a sense that danger lurks just around the corner. As such, lighting a scene is arguably the most important task in film noir photography. So it's no surprise that three of our five tips cover lighting.

The first tip is to add dimension to your shots by lighting them from the side instead of the front. Subjects lit from the front are bright and easy to see. However, they're also flat, lacking a sense of true size or depth in relation to the setting. These bright, flat images aren't consistent with film noir style.

Film noir lighting should come in from the sides. That way, it varies intensity across the person or object. This variation adds dimension to the subject, creating the depth that's missing from front-lit shots. Consider other indirect light sources to enhance the depth of the background and props, too. In addition, note that side lighting doesn't mean exactly left or right of the frame; it could also mean at some diagonal to the camera and pointing upward or downward into the shot.

Still shots in film noir style don't have to avoid using a flash. However, photographers should adjust and position the flash to create the same effect as other lights. This may mean mounting the flash on a tripod away from the camera. Professional cameras can connect to and use remote flash devices, attached wirelessly or by a cable back to the camera.

On occasion, the scene itself dictates an exception to the side-lighting rule. For example, if you're capturing a crime suspect during an interrogation, you might use a bright light directly on the suspect's face or straight down onto the suspect, leaving the rest of the room in black. That interrogation room cliché is a crime drama standard that can trace its roots to early film noir.

Besides choosing where to place lights, the type of lights you choose can make a big difference. We'll touch on that in our next tip.