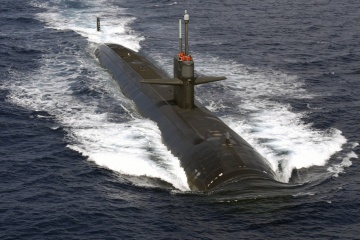 No one's going to be making cell phone calls from a submarine anytime soon.
Stocktrek Images/Thinkstock

Cell phone signals use very high frequency radio waves (around 800 or 1900 megahertz in the United States). They travel in a straight line, are extremely susceptible to interference and break apart as soon as they encounter salty seawater.

Even above the ocean's surface, a submarine would need to be pretty close to shore because cell phones rely on a network of base stations, or cell phone towers, to transmit signals. In theory, a cell phone might be able to communicate with a tower as far as 45 miles (72 kilometers) away, but a signal at this distance would be far from reliable; a range of just a few miles is more typical [source: Markgraf].

Submarines must stay submerged at a depth of about 200 to 330 feet (60 to 100 meters) in order to avoid detection [source: Baker]. For decades, submerged submarines have communicated only through extremely low frequency (ELF) or very low frequency (VLF) radio waves because signals in these very low ranges (300 hertz to 30 kilohertz) are able to travel long distances and penetrate seawater [sources: GlobalSecurity, Stanford University].

But ELF and VLF have extremely limited bandwidth, with data transfer rates ranging from a few hundred bits per second to as low as a few bits per minute. To get reception, submarines must tow large antenna cables and reduce their speed underwater.

In recent years, the U.S. Navy has explored new technologies, such as small communication buoys that can be launched to the surface to establish a connection with military satellites and quantum key distribution, which seeks to use the principles of quantum mechanics to communicate securely with submerged subs [sources: Baker, Edwards].