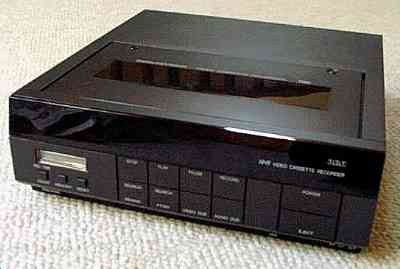 In 1956, the first commercial reel-to-reel videotape recorder was created by Charles Ginsburg and Ray Dolby while working for the Ampex Corporation. This new device was a major development for television broadcasters because it marked the first time that shows could be recorded and broadcast later. Prior to 1956, all shows on television were live.

Sony created the first inexpensive VCR in 1969. In 1976, the VHS tape format appeared and began its domination of the market. Video stores were soon to follow. Blockbuster opened its first video store in Dallas, TX, in October 1985, and now has over 8,000 stores.

The VCR itself has two jobs:

Both of these are formidable tasks, and the second one was a big technological challenge. In sound recording, the sound information is stored linearly on the tape. That is, the tape moves past the recording head and the sound information is laid down as a long line following the length of the tape. The tape might move past the head at a speed of 2 or 3 inches (5 - 8 cm) per second. A video signal contains perhaps 500 times more information than a sound signal, so the same approach cannot work. The tape would have to be moving past the head at a rate of many feet per second.

To solve this problem, two recording heads are mounted on a rotating drum that is tilted with respect to the tape. If you have read the HowStuffWorks article How Television Works, then you know that a television image is divided into a series of 525 horizontal scan lines, half of which are displayed every 60th of a second. Each pass of the VCR's rotating head reads or writes the data for one field (262.5 scan lines) of the television image. Therefore, the data recorded on the tape looks like this:

In this figure, the light blue bands are individual fields laid down by the recording head of the rotating head drum. Since the drum contains two heads on opposite sides of the drum (180 degrees apart), the two heads alternate, each one reading or writing every other band. The yellow tracks represent the audio and control tracks. The control track is especially important:

The relationship between the tape and the rotating head drum is shown in this figure:

The only problem this creates is that a VCR designer has to get the video tape to wrap around the rotating head in order to record or play back the tape. In addition, the device has to read the audio and control tracks from the tape, keep the tape moving at exactly the right speed and detect the end of the tape. To do all of this, the tape has to follow a tortuous path, like this:

Different VCRs use different approaches, but you get the idea. The drive mechanism in the VCR has to extract a good long piece of tape from the cassette and wrap it around a variety of rollers, drums and heads in order to play the tape. It is absolutely amazing that a VCR ever works!