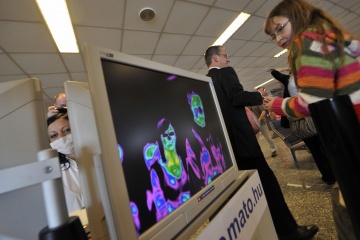 In May 2009, the Budapest Airport used a a thermographic camera at a security gate to monitor passenger temperatures to screen for possible carriers of influenza A(H1N1).
©ATTILA KISBENEDEK/AFP/Getty Images

Thermal imagers are continually improving in sensitivity and features. But they are not a perfect technology.

Sure, these cameras can see heat signatures within vehicles, homes and other dense materials. But any physical material (such as glass windows) that blocks heat will reduce the device's effectiveness. You can even buy clothing that will counter some heat seeking sensors [source: Maly].

There's also the matter of interpreting the images that appear on a camera's display. The often fuzzy, changeable pictures are simply representations of temperature and not actual pictures, so making sense of them depends on the user's expertise. Inexperienced people may misinterpret those images, especially in scenarios with extenuating circumstances such as inclement weather or interference.

Expense will continue to be an issue for anyone without deep pockets. Even the most affordable imagers cost many hundreds of dollars, and they have only a fraction of the capability of those deployed by government and military agencies.

Those that have the dough, though, can perform some amazing feats. The security and surveillance aspects are almost a given -- bad guys have a lot fewer places to hide when cops and soldiers can track suspects even without visual line of sight, whether it's in an urban area, on national borders or inside buildings.

Using thermal cameras, fire fighters can locate people trapped inside structures, home in on hot spots and pinpoint structural problems before someone gets hurt. Scientists can find Arctic polar bear dens deep within snow banks. Ancient ruins often exhibit different heat signatures than the soil and rocks surrounding them, meaning archaeologists can use imagers to find their next excavation site.

Building inspectors carry thermal cameras to find leaks or deficiencies in roofs and insulation. Similarly, remediation workers can find water and subsequent mold growth behind walls, even in cases where a property owner had no idea there was a problem.

Power grid components that are overheating may lead to failure and then blackouts. To ward off outages, workers leverage imagers to spot deteriorating areas in a grid. Gas leaks are another major challenge for utilities, and thermal cameras can see leaks before they become bigger issues.

Worried about an epidemic? Install thermal cameras at high-traffic public areas like rail stations and airports and you can spot feverish folks in a crowd.

The list of uses goes on and on. And as companies invest more in research and development, thermal cameras will only get better and cheaper, and thus find a place in many more situations, from recreation to research. What's now a hot technology is only getting hotter, and we humans are seeing our world in a whole new way.

We call them thermal cameras, but they aren't really cameras. Instead, thermal imagers are sensors. And for the moment, they are really, really pricey. I was fortunate enough to play with a handheld imager a few years ago when we were searching for the source of a mysterious water intrusion in a suburban home. Camera in hand, we found that one corner of the house was much cooler than other walls. We removed the drywall and found a hole just big enough to create a water problem during heavy downpours. We may have used the device for only a couple of hours, but it definitely proved its worth.