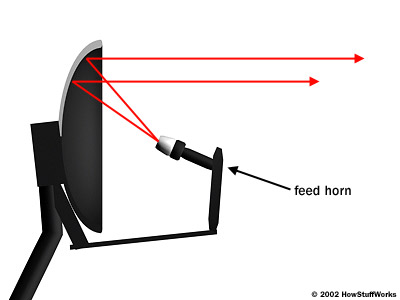 The curved dish reflects energy from the feed horn, generating a narrow beam.

When the signal reaches the viewer's house, it is captured by the satellite dish. A satellite dish is just a special kind of antenna designed to focus on a specific broadcast source. The standard dish consists of a parabolic (bowl-shaped) surface and a central feed horn. To transmit a signal, a controller sends it through the horn, and the dish focuses the signal into a relatively narrow beam.

In this case, the point is the dish's feed horn, which passes the signal on to the receiving equipment. In an ideal setup, there aren't any major obstacles between the satellite and the dish, so the dish receives a clear signal.

In some systems, the dish needs to pick up signals from two or more satellites at the same time. The satellites may be close enough together that a regular dish with a single horn can pick up signals from both. This compromises quality somewhat, because the dish isn't aimed directly at one or more of the satellites. A new dish design uses two or more horns to pick up different satellite signals. As the beams from different satellites hit the curved dish, they reflect at different angles so that one beam hits one of the horns and another beam hits a different horn.

The central element in the feed horn is the low noise blockdown converter, or LNB. The LNB amplifies the radio signal bouncing off the dish and filters out the noise (radio signals not carrying programming). The LNB passes the amplified, filtered signal to the satellite receiver inside the viewer's house.