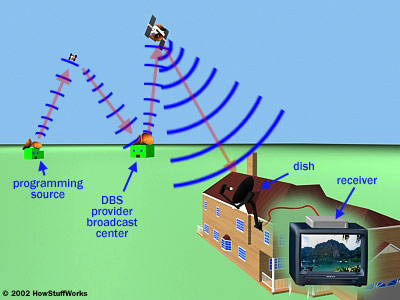 Early satellite TV viewers were explorers of sorts. They used their expensive dishes to discover unique programming that wasn't necessarily intended for mass audiences. The dish and receiving equipment gave viewers the tools to pick up foreign stations, live feeds between different broadcast stations, NASA activities and a lot of other stuff transmitted using satellites.

Some satellite owners still seek out this sort of programming on their own, but today, most satellite TV customers get their programming through a direct broadcast satellite (DBS) provider, such as DirecTV or DISH Network. The provider selects programs and broadcasts them to subscribers as a set package. Basically, the provider's goal is to bring dozens or even hundreds of channels to your TV in a form that approximates the competition, cable TV.

Unlike earlier programming, the provider's broadcast is completely digital, which means it has much better picture and sound quality (see How Digital Television Works for details). Early satellite television was broadcast in C-band radio -- radio in the 3.7-gigahertz (GHz) to 6.4-GHz frequency range. Digital broadcast satellite transmits programming in the Ku frequency range (11.7 GHz to 14.5 GHz ).

There are five major components involved in a direct to home (DTH) or direct broadcasting (DBS) satellite system: the programming source, the broadcast center, the satellite, the satellite dish and the receiver.

Early satellite TV viewers who used C-band radio for their broadcasts were able to catch wild feeds of syndicated programs, sporting events and news. These broadcasts were free, but viewers had to hunt them down -- they didn't get previewed or listed like regular broadcast programming. These signals still exist, and Satellite Orbit magazine publishes a list of today's wild feeds.