How are movies stored on DVD discs? 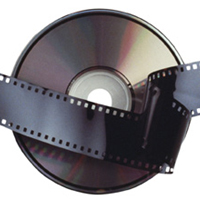 ­ Even though the storage capacity of a DVD is huge, the uncompressed video data of a full-length movie would never fit on a DVD. In order to fit a movie on a DVD, you need video compression. A group called the Moving Picture Experts Group (MPEG) establishes the standards for compressing moving pictures.

When movies are put onto DVDs, they are encoded in MPEG-2 format and then stored on the disc. This compression format is a widely accepted international standard. Your DVD player contains an MPEG-2 decoder, which can uncompress this data as quickly as you can watch it.

A movie is usually film­ed at a rate­ of 24 frames per second. This means that every second, there are 24 complete images displayed on the movie screen. American and Japanese television uses a format called National Television Standards Committee (NTSC). NTSC displays a total of 30 frames per second; but it does this in a sequence of 60 fields, each of which contains alternating lines of the picture. Other countries use Phase Alternating Line (PAL) format, which displays at 50 fields per second, but at a higher resolution (see How Video Formatting Works for details on these formats). Because of the differences in frame rate and resolution, an MPEG movie needs to be formatted for either the NTSC or the PAL system.

­ The MPEG encoder that creates the compressed movie file analyzes each frame and decides how to encode it. The compression uses some of the same technology as still image compression to eliminate redundant or irrelevant data. It also uses information from other frames to reduce the overall size of the file. Each frame can be encoded in one of three ways:

Depending on the type of scene being converted, the encoder will decide which types of frames to use. If a newscast were being converted, a lot more predicted frames could be used because most of the scene is unaltered from one frame to the next. On the other hand, if a very fast action scene were being converted, in which things changed very quickly from one frame to the next, more intraframes would have to be encoded. The newscast would compress to a much smaller size than the action sequence. This is why the storage capacity of digital video recorders (which store video on a hard drive using the MPEG format) can vary depending what type of show you are recording.

If all of this sounds complicated, then you are starting to get a feeling for how much work your DVD player does to decode an MPEG-2 movie. A lot of processing power is required -- even some computers with DVD players can't keep up with the processing required to play a DVD movie.

See the next page for more information and useful links.

How Facebook TV Will Work
How the Dallas Cowboys Scoreboard Works
How many different speaker drivers are there?