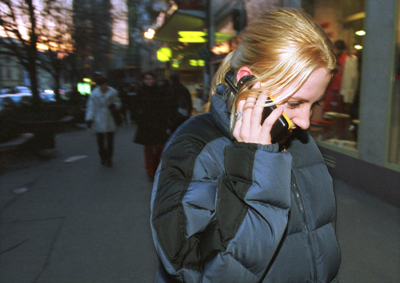 ­People traveling internationally or studying abroad might want to get a prepaid cell phone.
© Photo by Sean Gallup/Newsmakers

Let's say you're calling from within the United States, using a Virgin Mobile prepaid phone as an example. All you need to do is dial 011 + the country code + the city code + the phone number. For some countries -- like Canada, Puerto Rico or Jamaica -- you don't even need to dial 011. Virgin Mobile charges the international per-minute rate for the country you're calling plus your standard airtime rate. There's no additional international charge for calls to Puerto Rico or the U.S. Virgin Islands.

If you're calling from another country, however, you're likely to have a problem with your phone's compatibility with local networks. Cell phone networks in the United States use several different technologies to transmit information. Only one of these, time division multiple access (TDMA) supports Global System for Mobile Communications (GSM), the international standard used in Europe, Australia and much of Asia and Africa.

Cell phone users in those countries can buy one phone and simply switch to a different SIM card for phone access in each country. Cingular and T-Mobile use GSM. But even so, the 850MHz/1900-MHz GSM phones used in the United States are not compatible with the 900-MHz/1800-MHz frequencies used by the international system.

One option is to buy a GSM phone to use at home and with SIM cards while traveling. ATT, for example, offers the Samsung A437 as a world phone through its GoPhone prepaid cell phone plans. But unless you have the phone unlocked to work with other cell phone providers, you'll probably have to pay your company's international roaming rates.

Your service probably won't give you the code to unlock the phone, but several Web sites offer unlock codes for free or a small fee. SIM cards for various countries are available from Web sites such as Telestial.com, as are unlocked GSM cell phones.

If you're going to be spending an extended time in a country, another option is to buy a prepaid cell phone once you arrive. In almost every country, you get unlimited incoming calls for free.

For lots more information on prepaid cell phones and related topics, see the helpful links below.