What sorts of games work with the Rift? 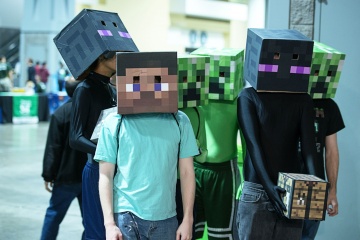 Fans of "Minecraft" will be happy to know that a VR-adaptation of the game, titled "Minecrift," is available for download on the Oculus Rift site.
© Marvin Joseph/The Washington Post via Getty Images

Although at the time of this writing the consumer version of Oculus Rift isn't out yet, there are already some games from major developers that have been created or ported to work with the device. These include:

These may not all be available to the public in Rift-ready form, but there are non-VR versions of all but "Eve: Valkyrie" in the wild. "Doom 3 BFG Edition" was given out with the development kits purchased through the Kickstarter campaign, and "Eve: Valkyrie" has been demonstrated with the newer Rift prototypes and is slated to come out sometime in 2014.

Lots of existing games are already being adapted to work with the Rift. And there is a spot on the Oculus VR Web site here for developers to share their games, mods, demos, simulations and the like. There are more than 100 titles available on the share site already, including "Minecrift," a VR conversion of the popular game "Minecraft" (a paid copy of "Minecraft" is required for it to work); and "VR Cinema," a simulation of a movie theater within which you can actually watch videos.

Unfortunately, not just any 3-D game can be played with the device just yet. Due to the unique properties of the Rift, including its wide field of vision and head-tracking abilities, games and other applications will have to be specifically made to work with the device. The main things that have to be integrated are motion tracking and 3-D rendering along with distortion adjustment to produce the stereoscopic images (a slightly different one for each eye).

As of early 2014, around 50,000 units have been shipped [sources: Edwards, Perton]. With so many in the hands of developers, there are no doubt many games in the works. But although the Rift was designed primarily with gaming in mind, that doesn't mean that's all it will be good for. We might one day don our headsets to watch 360-degree videos, sit in virtual classrooms, view live entertainment or sporting events and move through simulated environments paired with exercise equipment for fitness.

Some higher-end players are already exploring the possibilities of the Rift. The NASA Jet Propulsion Laboratory (JPL) has experimented with an Oculus Rift in conjunction with an Xbox Kinect 2 to control a robotic arm -- a possible step toward controlling robots remotely in outer space. The JPL has also used a Rift with a Virtuix Omni treadmill and panoramic images captured by the Curiosity rover to simulate walking on Mars. A myriad of companies have reportedly already bought the developer kits for their own purposes, and there's even been talk of using them for lower-cost military training. The possible applications for a lightweight, inexpensive VR headset are truly endless.