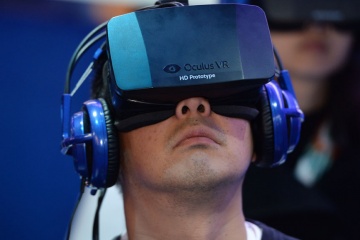 Attendees at the 2014 International CES had the opportunity to play “EVE: Valkyrie” on the Oculus Rift.
© ROBYN BECK/AFP/Getty Images

The Oculus SDK is publicly available and open source, meaning that anyone can obtain, use and even modify and distribute the code. There are a few caveats spelled out in their license agreement, including that any modifications must be shared with Oculus VR, that the software may not be used to interface with other commercial VR headsets that aren't approved by Oculus VR, and that the code must be distributed in whole, not part. They can also revoke your rights to use the SDK if you create an application that causes health or safety issues.

Some of the samples include:

Developers can access the Oculus VR Developer Center to retrieve the latest versions of the SDK components and for online support. These resources should help greatly in developing or porting more games and other content to the Oculus Rift.

The company has also released an Oculus Latency Tester whose hardware and software are both open source. Its firmware is under the Apache 2.0 License and its schematic, board layout and enclosure are licensed under Creative Commons Attribution 4.0. You can buy the Latency Tester from the Oculus VR site, and you can use, alter or distribute any portion of the tester and its code. Or if you're a tinkerer, you can build your own using the freely available files.

Physical modification of the Oculus Rift unit itself is not recommended, however, since the company may not be able to support the modified device. But its source code is fair game.