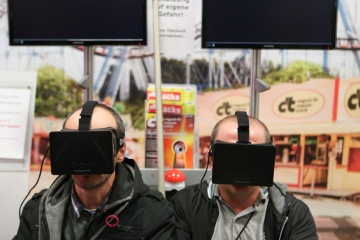 The Oculus Rift Development Kit version 1.1 includes the Oculus Rift head set, which vaguely resembles a pair of black ski goggles with a rectangular box covering the front end. The kit also comes with a control box that's permanently attached to the headset via a 6-foot (1.8-meter) cable, a removable over-the-head strap for added comfort and stability, three pairs of vision lenses of different focal lengths, an HDMI cable, a USB cable, a DVI cable, an HDMI to DVI adapter and a 5-Volt switching US-standard power supply along with international power adapters. All of this comes housed in a hard case. The Oculus Rift dev kit goggles weigh less than a pound -- a mere 369 grams -- and the future consumer model may be even lighter.

The control box is used to hook the headset up to your computer and perform basic control functions. It includes HDMI, DVI, mini-USB and DC power connection ports, as well as five buttons for controlling contrast, brightness and power. A blue LED on top shows you whether the device is on or off.

The developer headset allows for head-tracking with 3 degrees of freedom (DOF), ultra-low latency and a field of view (FOV) of 110 degrees diagonally and 90 degrees horizontally for convincing immersion.

The Rift incorporates a flat 7-inch (17.8-centimeter) 60Hz LCD display screen with a resolution of 1280 by 800 pixels (around 720p high-def resolution). The screen is divided into 640 by 800 pixels per eye, with a 2.5-inch (64-millimeter) fixed distance between lens centers. The user views the screen through two lens cups. There are plans to make the consumer model's resolution at least 1080p, and the company has already demonstrated two 1080p prototypes (the HD and Crystal Cove models). The display inputs include DVI-D Single Link, HDMI 1.3+ and USB 2.0 Full Speed+, all fed to it through the single control box cord.

The device has a custom-built motion and orientation sensor unit with a sampling rate of up to 1000 Hz. The sensor unit includes a gyroscope, an accelerometer and a magnetometer, along with an ARM Cortex-M3 microcontroller. The data from all three sensors is combined through a process called sensor fusion to enable fast and accurate tracking of your head orientation and synchronization with what you are viewing. This allows you to turn your head in any direction and look around the virtual environment in real-time, but it doesn't allow for positional tracking.

A new prototype, dubbed Crystal Cove, debuted at CES 2014. It has a higher resolution 1080p AMOLED (active matrix organic light emitting diode) screen, lower latency, a higher refresh rate and much lower image persistence, meaning that the images you see on the screen change as quickly as you move rather than persisting on the screen long enough to cause a lot of motion blurring. Crystal Cove can also track position, rather than just orientation, with the help of IR LEDs (which look like little square white dots) all over the headset that are monitored by an external camera, giving you 6 degrees of freedom rather than just 3. You can lean toward things to get a closer look, or lean to look around corners, whereas with the developer kit you can turn your head in various directions to change the camera view, but you have to use a separate controller to handle all motion toward, away from or around things. This prototype is reportedly closer to Oculus VR's vision for the consumer version.