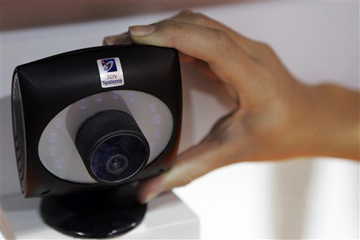 The 3DV Systems motion-sensitive ZCam camera was on display at CES 2008, before the company was acquired by Microsoft. The device was likely a predecessor of Project Natal and Kinect.
AP Photo/Paul Sakuma

On June 1, 2009, Microsoft's annual E3 press conference announced the development of a motion-sensitive gaming technology code-named Project Natal. The promotional video on YouTube, posted the same day as the press release, portrayed Project Natal as a controller-less way to play games, watch movies and keep in touch with friends. The video featured game control by just moving your body, plus facial and voice recognition for each player. At the end of the video, Microsoft gave viewers a peek at the hardware: a sleek, black, low-profile box sitting on a small platform, looking at you with two camera-like eyes in the middle and a green light offset to the left.

At the heart of the project was a 3-D detection digital camera. Reports suggested that the technology likely originated with Israeli start-up 3DV, a company Microsoft had acquired just two months before. Press images of the 3DV camera from months before were significantly different from the Project Natal form factor: a small upright box with a series of purple lights and a protruding camera lens in the center.

The natural response from video game console enthusiasts was to compare the technology to the Nintendo Wii. Nintendo had revolutionized console gaming when it released the Wii in 2006. The Wii meant that, for the first time, the game controller was more than just a series of buttons: It also detected the movement of the controller and allowed the player to interact with the game based on that movement. For three years, the Wii was unmatched for bringing motion detection to home video game consoles.

The central part of the Wii experience was the controller. The movement of the controller was the means of transmitting the player's movement to the console. In fact, Nintendo and other vendors created enhancements so the player could hold an object similar to that in the game (like a guitar or a tennis racket), or so the player could get motion feedback (a "rumble" effect). The Wii Balance Board controller added even more interactive options for players, detecting pressure from standing on it and shifting your weight.

Project Natal promised a dramatic leap forward from the Wii as it seemed to have overcome the need for any physical controller. Even better: Those with existing Xbox 360 consoles could use it without buying a completely new console. For the year following its original announcement, Microsoft gave celebrities and talk show hosts a chance to try it out. The result was a series of TV segments and YouTube videos buzzing about the good, the bad, and the creepy of the Project Natal experience. By the next E3 event, Project Natal, officially branded Microsoft Kinect, was one of the most anticipated Microsoft products in years, with a line of Kinect-based games to appeal to the same diverse audience as the Wii.