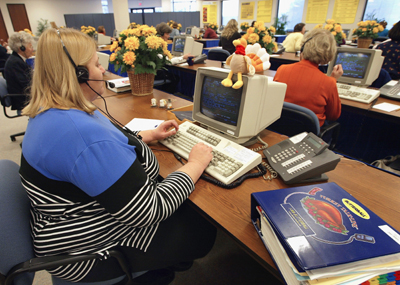 IVR systems are an example of computer-telephone integration (CTI). The most common way for a phone to communicate with a computer is through the tones generated by each key on the telephone keypad. These are known as dual-tone multi-frequency (DTMF) signals.

Each number key on a telephone emits two simultaneous tones: one low-frequency and one high-frequency. The number one, for example, produces both a 697-Hz and a 1209-Hz tone that's universally interpreted by the public switched telephone network as a "1."

A computer needs special hardware called a telephony board or telephony card to understand the DTMF signals produced by a phone. A simple IVR system only requires a computer hooked up to a phone line through a telephony board and some inexpensive IVR software. The IVR software allows you to pre-record greetings and menu options that a caller can select using his telephone keypad.

On the other end of the phone call, an organization can employ text-to-speech (TTS) software to fully automate its outgoing messages. Instead of recording all of the possible responses to a customer query, the computer can generate customized text-like account balances or flight times and read it back to the customer using an automated voice.

Many of today's most advanced IVR systems are based on a special programming language called voice extensible markup language (vxml). Here are the basic components of a VXML-based IVR system:

A company or organization can choose to purchase all of this hardware and software and run it in-house, or it can subscribe to an IVR-hosting service. A hosting service charges a monthly fee to use its servers and IVR software. The hosting service helps the organization customize an IVR system that best fits its needs and provides technical support should anything go wrong.

Now let's talk about some of the most common uses of IVR systems.