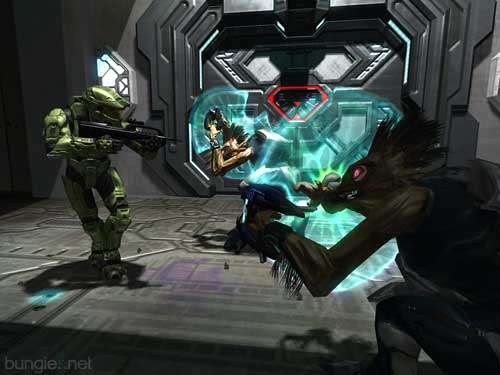 "That is what artificial intelligence is all about. It's about tricking the player into believing that there is something intelligent there."
Photo courtesy of Bungie Studios

As the interview started to wind down, Chris and I discussed some of the challenges facing AI.

"Are you familiar with the 'Uncanny Valley' theory from computer animated film?" he asked. I wasn't, so Chris explained it:

"As characters become more photo-realistic, you start to believe in them more and more. With humans characters, you get to a certain point of realism. What happens is there are characters that are so realistic you want to believe they are actually human. Then you notice their deficiencies. They have very plastic skin or very wooden eyes. All of the sudden they just become creepy. They are like zombie people, rather than appealing computer people. The appeal of the character rises, then drops dramatically, then rises again as you approach photo-realism."

"In our game, we're not trying to be photo-realistic. Our characters are what they are in terms of visuals. The problem is that we are starting to approach that 'uncanny valley' point with behavior. We have all these characters that say all of these interesting things, that are very rich and meaningful about their environment. They have all of these interesting combat capabilities, but you can do something that they are not programmed to respond to, and they don't know how to react. Then all of the sudden they become dumb, like a zombie. They don't have any lines for, 'Hey Chief, you just made that soda machine do a complete flip. That was awesome!'

They have all this interesting stuff they do and say in combat and after combat and at certain points in the mission, but if you just hang around and observe them, they don't really do anything. The game industry is fast approaching this point where we are building characters who are really lifelike in their specific modes of operation, but when you take them out of those modes of operation, they really start to fall apart.


The challenge with AI in games right now is, 'What are the boundaries of AI? How do we hide those boundaries from the player? And how do we go beyond them?' That is what artificial intelligence is all about. It's about tricking the player into believing that there is something intelligent there."