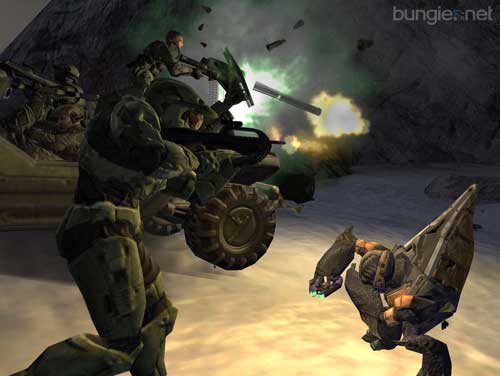 "In Halo 2, we have new tools for [the AI] to work together."
Photo courtesy of Bungie Studios

"Halo 1" offered players a level of a AI coordination and cooperation rarely seen in FPS games. By creating a series of built-in responses in each individual AI, the creators made the AI appear to be working together. Chris explains, "one of the most interesting things about Halo is that we have a lot of tools to make the AI work together as a coordinated force... [The AI] make individual decisions based on what's happening around them with their friends. For example, a Grunt would make the individual decision, 'The Elite I was just with got killed. So I am going to run away.'"

The Grunts are programmed to always react in that way. What appears to the player as an emotional or tactical response is, in fact, a simple "if/then" statement.

AI were also issued commands to move individually with guidelines that made them appear as if they were a team. Chris used the Marines as an example: "'I like to stand with my friends, but not too close.' That is how the Marines work. The Marines tend to move together as a unit but they won't stand in each others field of fire."

But that was the first Halo. "In 'Halo 2,' we have new tools for them to work together," Chris explains. His team added a joint behavior system to the AI that allows them to work together on much more complicated tasks. "The AI will say, 'I'm considering this joint behavior, and I notice there are people around me who are my friends.' So they post a request to the other AI to say, 'I would like to do this behavior with you. Will you accept it?' and the other AIs, when it is their turn to think, will either accept it or reject it and tell the originator. We used these new developments for various subtle and obvious improvements. The most obvious is the characters talking to each other. The AI posts a joint behavior, 'I notice both of us are looking for the same guy. I want to tell you something about him and I want you to respond to me.' or, 'We're both looking for the same guy. Let's work together to find him so that we can jump out and surprise him together.'"

Getting into a vehicle is another group behavior. If an AI can see a moving vehicle, it cam post a request to the AI driving that vehicle, asking for a ride. The AI driver, if he accepts the post, will stop, turn around and pick him up.

And the dialogue isn't just for flavor, Chris explains. "The talking is important because the AIs behavior and communication wouldn't be obvious to the player without the AI saying something and declaring their motives to the player."