Halo 2 and the Art of Storytelling 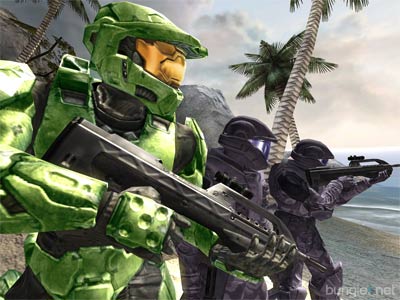 Master Chief and the Marines are at it again in "Halo 2." See more Halo pictures.
Photo courtesy Bungie

"Probably the thing people don't realize is what we didn't do [when creating "Halo 2"] is come back and go, 'OK, what are the new technical goodies we have and how many guns do we need?' That is actually exactly what we don't do."

Pete Parsons, the studio manager of Bungie Studios, the creative force behind the enormously successful video game "Halo," wants you to understand that very clearly. Parsons and the rest of the team at Bungie are dedicated, above all else, to creating a really compelling story and the universe in which that story unfolds.

The enormous success of the original "Halo" can be attributed to this dedication. While many critics and fans tout the game's stunning graphics, impressive AI, or top-notch physics, most don't realize that these are tools Bungie uses to serve the story. With the break-away success of "Halo," the Bungie team had an enormous challenge ahead of them: creating a sequel that would meet the incredible expectations of fans worldwide. In essence, they had to top one of the best games ever made.

HowStuffWorks had a chance to sit down with Pete Parsons and discuss one of the most important aspects of "Halo 2": the story.

HSW: Was the "Halo" story fully realized and segmented into different games, or did you take the story as far as "Halo 1" and when it came time for a sequel, build the story from the ground up?

Pete Parsons: The "Halo" universe has an overarching story that is well thought out and was well thought out before "Halo 2." We have roughly 600 years worth of "Halo" fiction, and we know what happens inside of that universe at any given time. The ["Halo 2"] story itself only existed as notes and was really fleshed out. We know ultimately, at least in the "Halo" universe, where humanity came from, where it's going to, at what point in time it comes in contact with The Covenant [the villains in "Halo"] and what happens well beyond that.

"Halo 2" picks up literally right after "Halo 1." But there is still plenty of story in and around that. And you can see some of that in the three novels we have.

HSW: There is tons of fan fiction and tons of speculation. If you look on the Web, there are a lot of fan-generated theories about the origins of the Flood and The Covenant and the Forerunner, Guilty Spark, the Halo and everything. Did you guys pay attention to that when you were building the story of "Halo 2"?

Pete Parsons: Here's a conversation that never happened: "Oh, what are the fans saying? I read this piece of fan fiction -- we should change the universe in this kind of way." We never do that. We don't do it for our fiction; we don't do it for our games. We certainly look at what they're interested in, and in cases where they may be interested in one particular aspect or asking questions about another aspect, we certainly may flesh out more of the story because of that. But I can't think of times where we look at fan stuff and say, "Oh we should pick up on that and do it." And it's not because we don't love our fans and care about them. It's because we, as a group, have our own very specific ideas about what happens and how it happens. 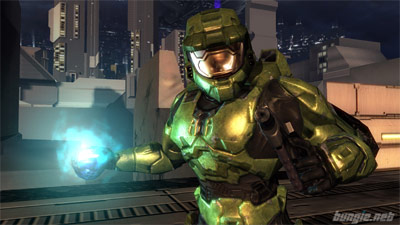 HSW: The novelization of a video game is, well ... novel. Where does Eric Nyland get the background for his books?

Pete Parsons: We work closely with him on all the stories. So what we do is we have these story arcs of the "Halo" universe, and Eric goes in and says, "Well that's a really good piece to take and here is in a microcosm what I think that story will look like."

HSW: Are you guys very conscious to make sure that everything fits together -- that the books and games don't contradict one another -- so that everyone can look to any source and say, "This is very consistent, fully realized world"?

Pete Parsons: Yes, but not in the marketing kind of way. We do it because we want the "Halo" universe to be manifold. You can certainly probably pull out some inconsistencies, but as a general rule we really try to keep it manifold. Because we think that ultimately we are doing this for ourselves. And after that, we're doing it for our fans, and we want them to really believe in this place that is the Halo universe. I think the reason Halo has captured so many imaginations is because we care a lot about what's going on in that universe and how believable that universe is. We have this high level myth that we understand very well.

HSW: So here's this first person shooter game where you play this armored cyborg in the future, fighting aliens who are trying to destroy mankind. It's classic sci-fi themes -- classic video game type. If you back up and look at it, it's not that special or groundbreaking. What do you think made "Halo" so special? What made it stand out above all these other games?

Pete Parsons: At the end of the day, I don't really know. But I've got a strong hunch which is I think we have been able to create a character that is almost universally cool and who you want to be. The Master Chief is something of this empty vessel that I can fill, that I can become.

I think we have then been able to place him beside and against characters that have more motivation than just another bug hunt. We've been able to give you characters like Sgt. Johnson or Cortana; things that are interesting and have their own threads of history themselves ... The characters are like you and me, but hundreds of years in the future. And then the Covenant, which again is certainly bugs to be hunted, but smart bugs that have their own culture and their own philosophy and their own motivation.

Then we've able to place it all inside of a universe that is believable. We were able to provide this stage that was really compelling. Even though when you say, "Yeah it's about a cyborg in the future and he kills aliens." [laughing] It doesn't sound very good. Once we created that stage with a protagonist and an antagonist we would be able to apply a game mechanic to it that was really interesting and felt really natural.

Then all of the good stuff, whether it be great graphics, or being continually forced to make interesting choices on your weapon, or being able to do what you want to do -- simply the act of putting a bullet on a pixel or making the controller feel really interesting -- I think all of those things remove those filters that compromise the suspension of disbelief. I think if you do enough of that, all of the sudden you've got something you can really feel a part of.

I've heard people say many times, "You know Halo didn't do any one thing better than anybody else, it just did everything really, really good." And that made it what it was. 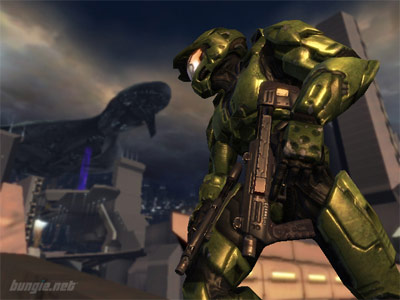 So much killing to do ... so little time.
Photo courtesy Bungie

Pete Parsons: I never believe we will merge in any way shape or form with films. The way I like to think about it is that games will emerge in their own right as their own form of entertainment. And not just in the creativity of the work, but in the business side as well. Because I think if the first part is done right the second part will follow. You know, the movie business emerged over a hundred years ago, and it really evolved. We're not in the infant stage, but we're certainly in the toddler stage, and I absolutely believe we will emerge in our own right.

I really love movies ... but at the end of the day, I like games better because you know, no matter what I do to a movie, no matter how cool a movie is, no matter how much it's changed me, every time I sit down and watch it, it's the same.

The people that make games have a really interesting opportunity to create a work of art that you really care about or that you really believe or that you just have fun with, but where you get to be the center of attention. You get to make the choices. It's you; it's you on the Halo standing between the destruction of mankind and the Covenant juggernaut -- right? And ultimately, for me, that is more compelling.

It's a new type of storytelling, and Pete Parsons and his team at Bungie are pioneers and visionaries in the field. For years fans eagerly awaited the sequel to "Halo." All that time, scouring the net, greedily gobbling up tid-bits of news, gossip, screenshots and rumors. In month ahead it built to a raging storm of speculation and anticipation that burst worldwide on November 9th, 2004. You saw this on the news. You heard about this from friends. If you'd never heard of "Halo" before, that changed after November 9th, 2004.

In the eye of the storm, Pete Parsons and the artists at Bungie have created more than a video game: They have created a cultural event. But for a man so close to the biggest day in entertainment history and so close to the game that created that day, as our conversation came to a close, Pete seemed calm, collected and consistent in his belief in Bungie's overall mission: to create a new type of storytelling. "I really like thinking about people putting up on their list of great entertainment experiences. They love 'Moby Dick,' 'Raiders of the Lost Ark' is definitely in their top five, and you know whatever game -- be it 'Halo' or some other game -- it's right up there on that pedestal with other great entertainment experiences people have had. And I don't believe that's just possible; that's going to happen."