What is the Halo? 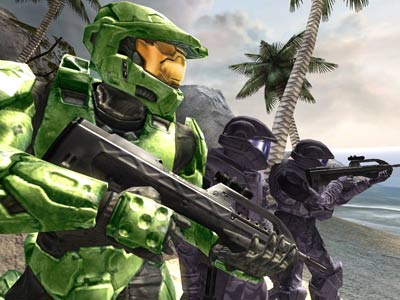 After rescuing the captured Captain Keyes from the Covenant battleship, the Truth and Reconciliation, Master Chief learns that the Covenant believe the Halo holds a powerful weapon. It turns out the Covenant intends to seize control of the weapon and use it against mankind.

Now the Marines struggle to get the weapon before the Covenant does. After many fierce battles to control the Halo's map room and control room, Captain Keyes takes a Marine unit with him to retrieve Halo's mysterious weapons cache. Cortana is installed in Halo's system and learns the true nature of this weapon. She sends Master Chief to stop Keyes and the Covenant from unlocking this terrible weapon. By the time the Chief locates Keyes, it's too late.

The weapon turns out to be a sentient parasitic race called The Flood. The Flood decimates the Marines and the Covenant alike, turning their mangled corpses into zombie-like Flood warriors. The Halo is now the stage for a gruesome three-way battle.