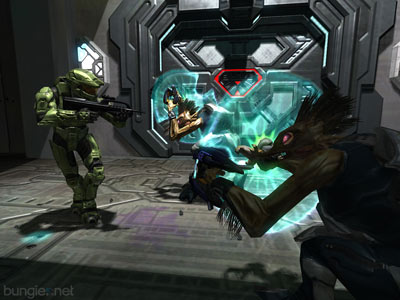 Master Chief, the only surviving Spartan is on board the naval cruiser Pillar of Autumn (PoA) as it flees the defeat at planet Reach. During its escape, the PoA comes under Covenant attack. In an effort to lure the Covenant away from Earth, the PoA makes a blind jump into light speed. When the PoA drops out of light speed, the crew finds themselves near a huge ring-like structure in orbit around an unknown planet. They also find the Covenant waiting for them.

The ship's captain orders the evacuation of the PoA as it comes under attack from Covenant boarding parties. Captain Keyes orders the Master Chief to take the PoA's shipboard A.I., Cortana, and escape so that Cortana does not fall into enemy hands.

Repelling boarders along the way, Master Chief escapes the crippled PoA on the last lifeboat. He and scores of other fleeing Marines and Naval personal head for the strange ring world as Captain Keyes crash lands the PoA. Hot in pursuit, the Covenant sends assault forces to the ring world to mop up the human survivors.

This is the central conflict of "Halo." As the stranded Marines regroup and organize, they wage guerilla war against the Covenant. The longer the Chief and the Marines spend on the Halo, the more they begin to unlock its secret.