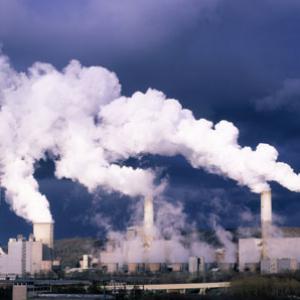 Coal-fire power plants like this one contribute immensely to air pollution. Solar power does not.
Acilo/iStockphoto

It's pretty easy to determine the most important benefit that solar battery chargers provide: They don't require external electrical sources to recharge your batteries. This means that solar battery chargers offer freedom of movement. You can find the sun pretty much anywhere on Earth during the daytime. So, if you find yourself lost in the woods with a dead cell phone, you need only the sun's rays to get it up and running again.

­This lack of a typical electrical source also offers some subtler benefits. Solar cells generate no emissions, waste or byproducts; those photons that aren't used simply pass through the silicon or bounce off of it as they would any other material. Remember, this electricity is produced by the transfer of energy from photon to electron, which frees the electron and allows it to flow. Electricity is not itself a form of energy, but an energy carrier. Producing it through the photoelectric effect is a benign way of generating an electrical charge.

However, the electricity that's produced around the world is often much less benign from an environmental standpoint. For example, in 2008, nearly half of the electricity generated in the United States came from the burning of coal [source: EIA]. While coal is a cheap and easy way to generate electricity, it's also a major source of pollutants. The Environmental Protection Agency (EPA) estimates that coal-fire power plants generate 59 percent of the sulfur dioxide in the air within the U.S., as well as 50 percent of the particulate pollutants. What's more, coal-fired power plants also contribute heavily to mercury pollution [source: EPA].

Freedom of movement and environmental friendliness are the two biggest reasons to own a solar battery charger. However, there are also a few drawbacks to solar charging. Chief among them is that for around half of any given day (outside of the Earth's polar regions), the sun is nowhere to be found. The absence of photons showering from space makes any solar power device all but useless at night. Bad weather and heavy cloud cover also have a big impact on how well a solar cell operates. Even in bright sunlight, most solar cells currently in production are only about 10 percent efficient, which makes them slower than chargers that plug into a wall outlet [source: DOE].

Still, if you find yourself trapped in the woods, you'll likely conclude that a solar battery charger was a great invention indeed.

For more information on gadgets and other related topics, visit the next page.