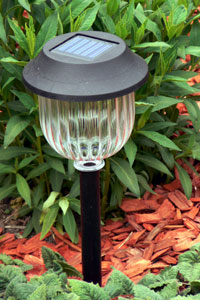 Solar cells are usually made of silicon.
Iwan Drago/iStockphoto

The sun has been sending light and heat to the Earth for several billion years. Yet, only recently have we humans figured out how to capture and harness some of this energy as electricity. The first method was the photovoltaic cell created by researchers at Bell Laboratories in 1954 [source: DOE]. Since then, solar cells have evolved from transforming sunlight into usable electricity for huge, expensive space equipment to more down-to-earth devices like battery chargers. That's great, but how is this solar energy translated into electricity?

This is how it happens: An electrical current is created by the movement of free electrons, which carry a negative charge. Normally, electrons are entangled in an orbit around the nucleus of an atom, which is made of protons and neutrons. These atomic particles are the building blocks of matter and can be found in absolutely everything. Some matter holds its electrons more tightly than others, but given enough energy, an electron can be knocked loose from its orbit.

One particle of energy that does a fine job of knocking electrons loose from atoms is the photon. This is the subatomic energy packet that forms the basis for light. Photons from sunlight carry enough energy to jar electrons from their orbit in the element silicon, which is the material used in most solar cells. The photon's ability to disentangle electrons is called the photoelectric effect [source: ASU].

An imbalance between positively charged and negatively charged particles is created within the silicon by adding the impurities boron and phosphorus. This imbalance creates an electrical field in the silicon. When photons strike the material and break electrons free from their orbits, this electrical field pushes them toward the front of the solar cell, which creates a negatively charged side. The protons left behind on the other side of the cell surface create a positive charge [source: GE]. When these two sides are connected using an external load -- an indirect circuit like the terminals of this solar battery charger -- the electrons flow into the load and creates electricity. Since a single solar cell only produces one or two watts of electricity, multiple cells are combined to form modules that work together to produce enough power to charge a battery [source: DOE].

Chemical batteries generate electron flow through a chemical reaction. Lithium-ion batteries, like those found in cell phones and iPods, create energy through an exchange of ions from lithium to carbon. In both types of batteries, electricity is created by the flow from negative to positive electrodes. When a battery is recharged, the flow of electrons reverses itself, and the battery's electrical potential is replenished.

Solar battery chargers don't directly charge the lithium ion battery in your gadget. They usually maintain their own rechargeable batteries -- either chemical or lithium-ion -- that are charged through the solar modules and redistribute their charge to your gadget. No external electrical source is required.

Let's explore the many benefits of solar battery chargers on the next page.