by Jeff Tyson
Exploration of metals and gold is more common than you think. Tahreer Photography / Getty Images

Mention the words metal detector and you'll get completely different reactions from different people. For instance, some people think of combing a beach in search of coins or buried treasure. Other people think of airport security, or the handheld scanners at a concert or sporting event.

The fact is that all of these scenarios are valid. Metal-detector technology is a huge part of our lives, with a range of uses that spans from leisure to work to safety. The metal detectors in airports, office buildings, schools, government agencies and prisons help ensure that no one is bringing a weapon onto the premises. Consumer-oriented metal detectors provide millions of people around the world with an opportunity to discover hidden treasures (along with lots of junk).

In this article, you'll learn about metal detectors and the various technologies they use. Our focus will be on consumer metal detectors, but most of the information also applies to mounted detection systems, like the ones used in airports, as well as handheld security scanners.

Anatomy of a Metal Detector 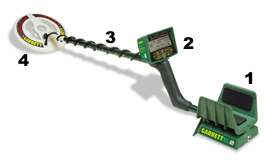 A typical metal detector is light-weight and consists of just a few parts:

Most systems also have a jack for connecting headphones, and some have the control box below the shaft and a small display unit above.

Operating a metal detector is simple. Once you turn the unit on, you move slowly over the area you wish to search. In most cases, you sweep the coil (search head) back and forth over the ground in front of you. When you pass it over a target object, an audible signal occurs. More advanced metal detectors provide displays that pinpoint the type of metal it has detected and how deep in the ground the target object is located.

Metal detectors use one of three technologies:

In the following sections, we will look at each of these technologies in detail to see how they work. 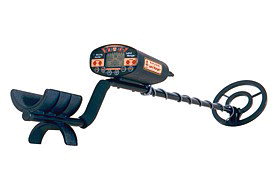 How does a VLF metal detector distinguish between different metals? It relies on a phenomenon known as phase shifting. Phase shift is the difference in timing between the transmitter coil's frequency and the frequency of the target object. This discrepancy can result from a couple of things:

Phase shift provides VLF-based metal detectors with a capability called discrimination. Since most metals vary in both inductance and resistance, a VLF metal detector examines the amount of phase shift, using a pair of electronic circuits called phase demodulators, and compares it with the average for a particular type of metal. The detector then notifies you with an audible tone or visual indicator as to what range of metals the object is likely to be in.

Advanced detectors even allow you to program multiple notches. For example, you could set the detector to disregard objects that have a phase shift comparable to a soda-can tab or a small nail. The disadvantage of discrimination and notching is that many valuable items might be filtered out because their phase shift is similar to that of "junk." But, if you know that you are looking for a specific type of object, these features can be extremely useful. 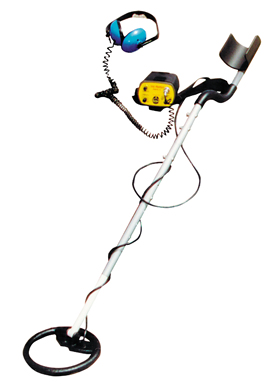 A less common form of metal detector is based on pulse induction (PI). Unlike VLF, PI systems may use a single coil as both transmitter and receiver, or they may have two or even three coils working together. This technology sends powerful, short bursts (pulses) of current through a coil of wire. Each pulse generates a brief magnetic field. When the pulse ends, the magnetic field reverses polarity and collapses very suddenly, resulting in a sharp electrical spike. This spike lasts a few microseconds (millionths of a second) and causes another current to run through the coil. This current is called the reflected pulse and is extremely short, lasting only about 30 microseconds. Another pulse is then sent and the process repeats. A typical PI-based metal detector sends about 100 pulses per second, but the number can vary greatly based on the manufacturer and model, ranging from a couple of dozen pulses per second to over a thousand.

The animation above demonstrates PI technology.

The sampling circuit sends the tiny, weak signals that it monitors to a device call an integrator. The integrator reads the signals from the sampling circuit, amplifying and converting them to direct current (DC). The direct current's voltage is connected to an audio circuit, where it is changed into a tone that the metal detector uses to indicate that a target object has been found.

PI-based detectors are not very good at discrimination because the reflected pulse length of various metals are not easily separated. However, they are useful in many situations in which VLF-based metal detectors would have difficulty, such as in areas that have highly conductive material in the soil or general environment. A good example of such a situation is salt-water exploration. Also, PI-based systems can often detect metal much deeper in the ground than other systems.

The most basic way to detect metal uses a technology called beat-frequency oscillator (BFO). In a BFO system, there are two coils of wire. One large coil is in the search head, and a smaller coil is located inside the control box. Each coil is connected to an oscillator that generates thousands of pulses of current per second. The frequency of these pulses is slightly offset between the two coils.

As the pulses travel through each coil, the coil generates radio waves. A tiny receiver within the control box picks up the radio waves and creates an audible series of tones (beats) based on the difference between the frequencies.

The animation above demonstrates BFO technology.

The simplicity of BFO-based systems allows them to be manufactured and sold for a very low cost.  But these detectors do not provide the level of control and accuracy provided by VLF or PI systems.

Metal detectors are great for finding buried objects. But typically, the object must be within a foot or so of the surface for the detector to find it. Most detectors have a normal maximum depth somewhere between 8 and 12 inches (20 and 30 centimeters). The exact depth varies based on a number of factors:

Hobbyist metal detecting is a fascinating world with several sub-groups. Here are some of the more popular activities:

Many metal-detector enthusiasts join local or national clubs that provide tips and tricks for hunting. Some of these clubs even sponsor organized treasure hunts or other outings for their members. Check out LostTreasure.com for more information on clubs.

In addition to recreational use, metal detectors serve a wide range of utilitarian functions. Mounted detectors usually use some variation of PI technology, while many of the basic handheld scanners are BFO-based.

Some nonrecreational applications for metal detectors are:

Manufacturers of metal detectors are constantly tuning the process to make their products more accurate, more sensitive and more versatile. On the next page, you will find links to the manufacturers, as well as clubs and more information on metal detecting as a hobby.

For more information on metal detectors and related topics, check out the links on the next page.

How Athos Clothing Works
Can clothing neutralize pollution?
How the Golden-i Works