How can an electrode suit treat nerve disorders? 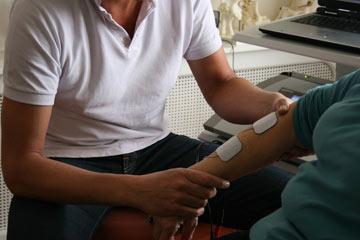 Using electrodes for physiotherapy isn't new, but fresh approaches to the use of the technology are being developed, and could enable patients to administer their own treatments at home.
©iStockphoto/Thinkstock

More than 5 million Americans suffer traumatic brain injury and its side effects every year -- side effects that often include neuromuscular problems. More than 760,000 additional Americans are affected by a neuromuscular condition caused by stroke or spinal cord injury every year. And when you add in the number of people living with cerebral palsy (500,000) and Parkinson's disease (about 1 million) the numbers just keep climbing -- it's estimated that movement disorders affect about one out of seven Americans [source: Alfred Mann Foundation, Parkinson's Disease Foundation].

Movement disorders are characterized by a problem with -- you guessed it -- movement. These conditions impair voluntary and involuntary muscle movements, which translates into problems with things you may take for granted, such as walking and speech. In addition, they may also cause pain, jerky movements and abnormal postures -- and conditions that impair people in this way can make living our daily lives difficult.

Electrical muscle stimulation (EMS), also known as neuromuscular electrical stimulation (NMES), is a therapy used to stop muscle atrophy, strengthen weakened muscles and increase muscle movement in patients living with neuromuscular conditions such as Parkinson's disease, muscular dystrophy, cerebral palsy and traumatic brain injury. It has also shown potential in treating tremors, akinesia, rigidity, spasticity and dyskinesia, and is now being used experimentally as a treatment for additional conditions such as epilepsy and obsessive-compuslive disorder.

EMS works because your body is electric -- this type of electrical pulse stands in for how the body's central nervous system would act if it were properly functioning.

Cells in your body called neurons carry an electric potential of about 40 to 60 millivolts (one thousandth of a volt) when they're resting. Get them excited, and they fire quick electrical impulses up to 100 millivolts. Each impulse only lasts about 1 millisecond, and each impulse has the potential to travel as far as 100 meters through the body's network of neurons [source: Cheshire Engineering Corporation]. Because your body is an imperfect machine, sometimes those neurons misfire. When their timing isn't in perfect synchronization (with other neurons as well as with other bodily systems) it impacts how the body functions, from the production and triggering of hormones to how a muscle contracts.

This is where EMS comes in -- EMS involves placing electrodes on specific areas of the body through which pulses of low-frequency electricity are delivered to stimulate muscle tissue -- this causes the targeted muscle to contract. Until recently, these electrodes tied you down, literally. Swedish chiropractor Fredrik Lundqvist had an idea to combine EMS with clothing, allowing patients a new level of mobility: an electrode suit now known as the Elektrodress. 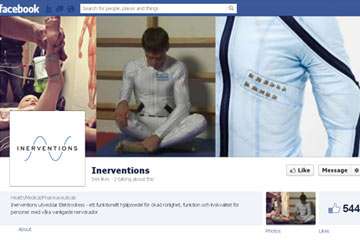 The Facebook page for Inerventions, the company started by Frederik Lundqvist to develop and produce the Elektrodress, shares news and press coverage of the innovative therapeutic technology.
Screencap by HowStuffWorks staff

The Elektrodress is wearable therapy. It combines electrical muscle stimulation (EMS) with vibration therapy (used to contract and strengthen muscles) to increase muscle strength, improve balance and coordination, and improve muscle movement and range of motion.

The Elektrodress began to materialize after Swedish chiropractor Fredrik Lundqvist pitched the concept on the Swedish reality TV show "Dragon's Den" and was awarded a grant of $300,000 USD (roughly 2,000,000 SEK) by the Knowledge Foundation [source: FashionTech].

The invention of the Elektrodress is not the first time doctors have tried accessible vibration therapy. During the 19th century, neurologist J.M. Charcot built a vibrating chair to treat patients with Parkinson's disease after he observed their symptoms eased after they spent time traveling (think about how turbulent those carriage rides must have been). His colleague, Gilles de la Tourette, took things a step further with the development of a vibrating helmet to be used as similar therapy [source: Goetz].

The Elektrodress is a full body unitard. In terms of style, think Star Trek, though, rather than your local gym. The bodysuit has strategically-placed electrodes throughout its fabric, used to stimulate muscles with EMS and vibration therapies. More than the electrode placement is customized, too: Each suit is customized for the individual wearer based on age and rehabilitation needs, meaning it can be adjusted for patients seeking to reduce chronic pain as well as patients who need help with muscle movement. The Elektrodress is designed to be used by patients in their own homes under guidance of a professional therapist. Patients are instructed to wear the suit for 60 to 90 minutes three to four times per week [source: Inerventions AB]. This takes the place of multiple visits that would normally need to be made to a therapist or doctor's office during the week.

The use of an electrode suit to treat nerve disorders is still in its infancy, but Inerventions, the company behind the suit, is positive about its early results. The suit improves patients' mobility, including walking with varying results, but has a pervasive positive impact on their physical, social and emotional outlook.

Where do the neurotransmitters dopamine and serotonin fit in? These neurotransmitters affect the electrical impulses in our neurons. Let's look at dopamine for example. High dopamine levels are behind the intense feelings of infatuation, but when dopamine levels drop too low, the body may begin to develop tremors, depression and obsessive-compulsive behaviors, among other problems. The imbalance of dopamine throws off the body's timing, from neuron to brain.

I love learning and writing about the power of our bodies, not only our mental and muscle capabilities but also about the body's electrical system. The electrode suit is one of those types of inventions that has the possibility of being a life changer for millions of people, which is inherently cool, and it began with an idea and a reality TV show. It also doesn't hurt that it looks like it's been fashioned out of something from the costume closet on a Star Trek set.