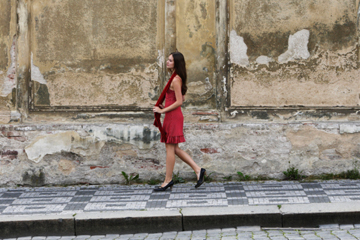 What if our clothing could clean the air it touched, while we were simply walking around going about our business?
Asia Images/Photodisc/Getty Images

The production and use of clothing (much like anything else we need) has a huge negative impact on the environment. It's made in factories, transported everywhere and often produced from synthetic materials that can't break down. But we don't often think about it because, generally speaking, clothing is necessary (and current environmental improvement initiatives tend to focus on reducing excessive and unnecessary consumption). But soon, clothes may actually have the potential to give something back to the environment.

The Catalytic Clothing initiative is the lovechild of Helen Storey and Tony Ryan. The idea is this: Humankind is failing miserably at anti-pollution initiatives -- though we've made some strides, they just aren't fast or effective enough. So, Storey says, we need to weave more pollution-fighting techniques into everyday life. What if our clothing cleaned the air it touched, while we were walking around going about our business?

Storey's career took off at several fashion labels (including Valentino, as well as her own). Now she teaches at The London College of Fashion, which allows her to explore her long-held fascination of the overlaps between science and art. Ryan is a UK-based expert in nanotechnology. The team is rounded out by experts in environmental health, textile design, chemistry and filmmaking.

Catalytic Clothing's secret weapon is titanium dioxide, a light-activated substance that's a common ingredient in sunscreen. Catalytic Clothing wants to embed clothes' fibers with nanoparticles -- bits of the compound that are so unnaturally small, they have to be created by scientists in a lab. Nanoparticles can be made of just about any scientific element (not just titanium dioxide), and their safety is a hot topic of debate. They're so small that researchers haven't yet been able to determine the scope of their reach...or what happens when they're absorbed deep in the human body. The process isn't quite perfected yet, but Catalytic's founders say the nanoparticles will probably be available in a detergent-like format (though they've considered the possibility of selling pre-treated clothing).

The titanium dioxide nanoparticles (or nano-titania) work like this: They're a catalyst, which means they have the power to change the chemical makeup of other chemicals they contact. When nano-titania clash with harmful pollution particles in the presence of oxygen and sunlight, a chemical reaction takes place that turns the dangerous stuff into other elements. For example, nitrogen oxide, one of the most common environmental pollutants and one of Catalytic Clothing's targets, will turn to relatively harmless nitric acid. All right there on the surface of your shirt and shoes...and able to be washed away by rain. And, once a piece of clothing is treated, the pollution-fighting power is expected to last until the fabric itself is considerably degraded -- in other words, you probably won't need to keep re-treating the same clothing.

Researchers in the UK have treated buildings with similar coatings, but they've found that, while the air immediately surrounding the treated area stays cleaner, the stationary nature means the procedure isn't as effective as they'd hoped. Clothes are a more promising venture because the surface area of an average person's clothing means a lot more air will be affected. The designers focused on cotton, since it's such a common material, but believe the technology will eventually be applied to most fabrics. The technology was sourced from Ecover, a firm in Belgium that deals primarily in ecological cleaning products.

Catalytic Clothing's founders admit that, like most grand plans, it won't really work on a small scale. But, they say, something is better than nothing, and they hope the idea will take off. The brand's awareness strategy appears to consist of a combination of clothing displays and lectures on science and art. "Herself," a flowing evening gown displayed at the University of Sheffield in 2010, was made of sprayed concrete and treated with the nano-titania coating. Though dramatic and sturdy, the dress didn't quite reinforce the notion that Catalytic Clothing was intended to be an everyday technology. Storey explained that the exhibit was an art project. In April of 2012, St. Andrew's Square in Scotland was adorned by a collection of catalyzed kilts and jeans. Similar events (minus the kilts) took place in cities like Copenhagen and Dubai.

Catalytic Clothing is projected to go into consumer testing (in other words, by average people) in mid-2012, and might be available by 2014, if it's determined to meet safety expectations and can be produced on a cost-effective scale [source: Loveday].

Let's get this out of the way first -- the thought of chemical reactions taking place on my clothing is really gross. It's not because of the reactions themselves, but because it forces me to think about all that pollution.

It's hard to decide whether we'd prefer to wear more clothing (to protect us from all the pollution we're suddenly more aware of) or less (more pollutant exposure on our skin, but fewer chemical micro-explosions).

Whenever a hypothetical wearer of Catalytic Clothing is described by the company, he or she is usually pictured walking. This isn't just because walking is a pollution-free form of transportation (whereas cars are the leading cause of the aforementioned evil nitrogen oxide particles). It's because walking is the best way to contact, and therefore clean, as much air as possible. For the benefit of germophobes and other general skeptics, founder Helen Storey wants to emphasize that the clothing won't attract dirt -- rather, it directs the chemical reaction outward. Each person wearing the treated clothing will, in effect, be a little beacon surrounded by constantly cleaner air. And though, as each person walks, they're cleaning the air for their surroundings, they're the primary beneficiary of newly cleaned air.

Kind of inspiring. But if Catalytic Clothing really wants their product to take off, I think they should start with ad campaigns designed for public transportation systems. It's perfect -- a captive audience of people who (for one reason or another) are opting not to drive (and are thus assumed to be implicitly more aware of environmental issues) and who are, at the moment of impact, trapped in highly concentrated filth.

Hand sanitizer for clothing. There's an idea. And, that said, I'm going to go wash these jeans now.