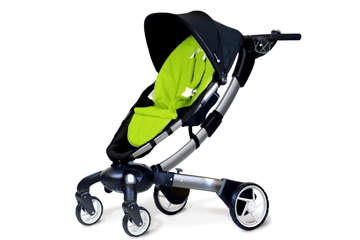 The 4moms Origami stroller is sort of like a luxury car for someone who can't drive yet.
Courtesy of 4moms

Like the song says, I believe the children are our future. And while we know we should teach them well and let them lead the way, if you have $849.99 to spare, you can at least treat your little bundle of joy well by getting him or her the stroller of the future.

The 4moms Origami stroller is a luxury car for people who will need to make it through a few more presidential administrations before they can get behind the wheel. Though the Origami stroller follows the same basic idea as other strollers -- put the kid in it, push where you need to go -- it has features, like daytime running lamps, an LCD dashboard and a cell phone charger, that makes the stroller your kid is currently riding in look medieval.

Maybe it's because of all the diapers they change, but most parents are pretty good at smelling BS. And a stroller that does everything the Origami stroller can do is sure to have some drawbacks. Daytime running lamps and cell phone chargers need batteries, and those batteries add weight, right? And all those accessories are bound to get in the way when it's time to fold the stroller and go.

The thing is, the 4moms Origami stroller only weighs 1.5 pounds (0.7 kilograms) more than a Stokke Xplory stroller, which has a similar modern design -- and a bigger price tag than the Origami [source: Stokke].

When it comes to folding, however, the Origami makes the Xplory look like it should be Xtinct. The Origami is a power folding stroller. Get the power folding feature started and you'll be as wide-eyed as an infant watching TV for the first time. Like the little drooler, your only thought will be, "How'd they do THAT?" 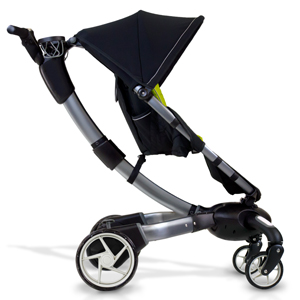 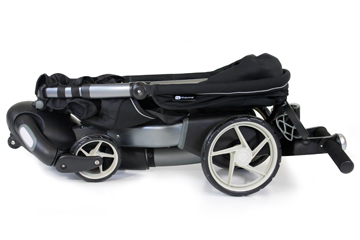 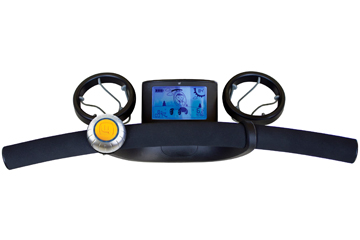 The Origami's rear wheels contain generators that work to power some high-tech treats for moms and dads -- like this LCD dashboard display.
Courtesy of 4moms

Sure, spending $850 on a stroller (or more if you want the car seat adapter that makes it possible for young infants to ride in the Origami) may seem like spoiling your kids, but as with a lot of baby products, the Origami really spoils the parents. In addition to the power folding mechanism, the Origami's rear wheels power some high-tech treats for moms and dads. The only thing that's missing is a wine fountain to help mom and dad unwind after bedtime (four cup holders are included, however).

At the front of the Origami are daytime running lamps, which help make the stroller more visible (though with its Cylon-like design and bright colors, it's hard to imagine anyone missing it) and pathway lights, which help keep the Origami on the straight and narrow after dark. Up on the push bar is an LCD dashboard, which keeps track of the stroller's speed, distance traveled and a thermometer. An optional accessory lets the Origami charge a cell phone while you walk.

So, what does the kid in the Origami get? A free ride. The seat is a typical stroller seat with a five-point harness and a 40-degree recline. There's also a sunshade. Actually, the kid features on an Origami stroller are pretty typical. But then again, it's the parents that are paying for this thing, so it makes more sense to give them the most toys. The Origami does have a four-wheel suspension, making sure that Junior won't get jostled too much if mom or dad hit a rough patch while staring at the Origami's LCD instead of where they're going. 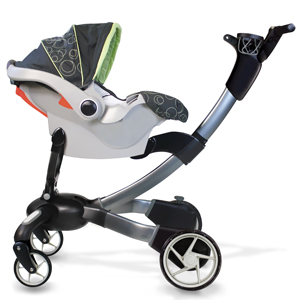 This is one of those assignments that's all about timing. Nine weeks before being assigned this article, I gave birth to my daughter. Like any new mom, I researched the heck out of baby products (I may have been more obsessive than other moms, but writing for HowStuffWorks.com will do that to you), but managed to miss the Origami, mainly because I can't swing a nearly $850 stroller. The Origami is part of a trend of integrating more tech into baby and children's products. Wooden blocks and a wind-up mobile just won't cut it anymore. Then again, I'm not one to talk: My daughter has her own iPhone (the causality of me trading up to a newer model) and goes to sleep every night with it by her side, running a white noise app.