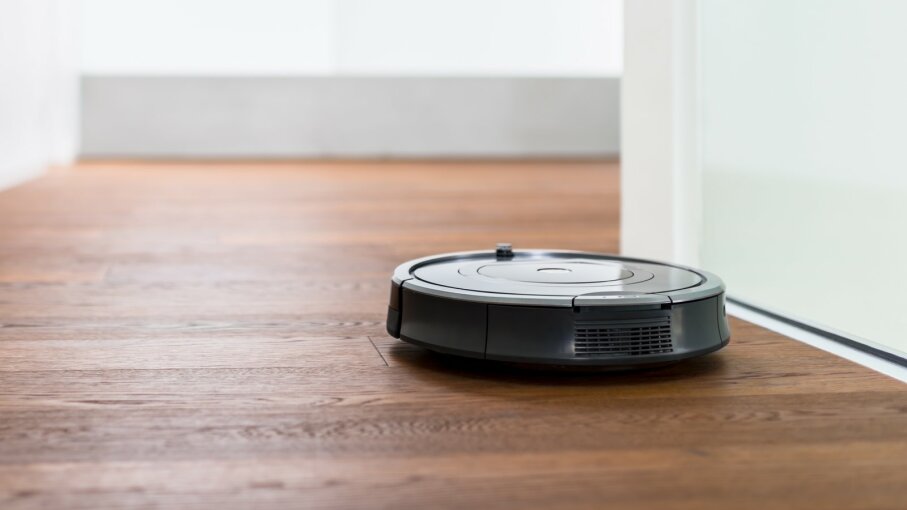 Who doesn't like to have their floors clean without much effort? Mlenny / Getty Images

Today's robotic vacuums are a far cry from the first models that you had to track down, stranded somewhere in your house, by their melancholy, "I'm out of power" beeping. The latest products clean your house, remember the layout to increase efficiency, dump their own dirt in a receptacle and find their way back to the charging station so they can rejuice.

In this article, we'll learn about robotic vacuuming, do an in-depth examination of the iRobot Roomba Red and check out some of the other vacuuming robots on the market.

There are a lot of models of robotic vacuums available today, and they range in price from $50 all the way up to $1,800. These vacuuming robots are typically low-slung and compact, meaning they can get under furniture that a regular upright vacuum cleaner can't.

Most manufacturers will tell you that a robotic vacuum is meant to supplement a standard, human-pushed vacuum cleaner, not replace it. They're meant to perform daily or weekly touch-ups to keep your home cleaner in between regular vacuuming cycles. Still, if you're someone who never vacuums in the first place, a little robotic helper can certainly get your floor cleaner than it is right now, and you hardly have to lift a finger.

­ By far the most popular robotic vacuum in the United States is iRobot's Roomba, which comes in various models ranging from the base-model Roomba Red to the super high-tech Roomba Scheduler. HowStuffWorks has a Roomba Red ($150 MSRP) that we're going to try out and dissect for this article. Let's start by checking out what's under the hood. 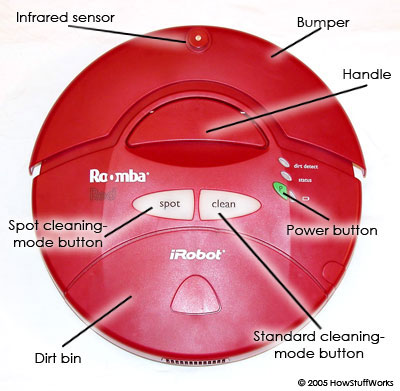 The Roomba Red is approximately 13 inches (33 cm) in diameter and 3.5 inches (9 cm) tall. An external examination reveals the following parts:

Roombas run on a rechargeable NiMH battery. The Roomba Red battery pack is rated at 3 amp-hours and takes about seven hours to fully charge to about 18 volts. Some of the more recent Roomba models have cut that charge time down to about three hours. A full charge equals approximately two hours of cleaning time, which in the Roomba world means vacuuming three medium-size rooms before it needs to rejuice. The mobility system consists primarily of two motor-driven, tracked wheels. Roomba steers by alternating the power supplied to each wheel.

Roomba has a total of five motors:

In the following sections, we'll address each of the systems that make Roomba work, beginning with the most robotically interesting one: the navigation system.

German companies Vorwerk and Infineon have teamed up to produce a prototype carpet that works in tandem with a robotic vacuum. The underside of the carpet is embedded with RFID tags, and the vacuum is equipped with an RFID reader and a digital map of the carpet's RFID locations. The tags direct the vacuum around the room for complete coverage and can tell it to reclean a specific area if it didn't spend enough time there. See Discovery Channel: Intelligent Carpet Directs Robot Vacuum to learn more. 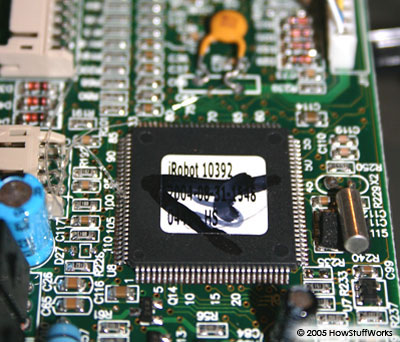 The self-navigation system is what makes a robotic vacuum robotic, and the biggest difference between a $50 model and a $1,500 model is the precision of the navigation sensors. Roomba uses iRobot's AWARE(tm) Robotic Intelligence System to make many decisions for itself, so minimal human input is required. The AWARE system is made up of multiple sensors that pick up environmental data, send it to robot's the microprocessor and alter Roomba's actions accordingly.

According to iRobot, the system can adapt to new input up to 67 times per second.

We'll look at the following parts to learn how Roomba navigates its environment:

Pressing on the bumper activates the object sensors (below).

The first thing Roomba does when you press "Clean" is calculate the room size. iRobot is a bit hazy on how it does this, but HowStuffWorks believes that it sends out an infrared signal and checks how long it takes to bounce back to the infrared receiver located on its bumper. Once it establishes the size of the room, it knows how long it should spend cleaning it.

Read Vacuum and Steam Cleaner Reviews and compare prices at Consumer Guide Products before you buy.

While Roomba is cleaning, it avoids steps (or any other kind of drop-off) using four infrared sensors on the front underside of the unit. These cliff sensors constantly send out infrared signals, and Roomba expects them to immediately bounce back. If it's approaching a cliff, the signals all of a sudden get lost. This is how Roomba knows to head the other way. When Roomba knocks into something, its bumper retracts, activating mechanical object sensors that tell Roomba it has encountered an obstacle. It then performs (and repeats) the sequential actions of backing up, rotating and moving forward until it finds a clear path.

Another infrared sensor, which we'll call a wall sensor, is located on the right side of the bumper and lets Roomba follow very closely along walls and around objects (like furniture) without touching them. This means it can clean pretty close up to these obstacles without bumping into them. It also determines its own cleaning path using what iRobot says is a pre-set algorithm that achieves complete floor coverage.

When HowStuffWorks tried it out, we found that Roomba starts cleaning in an outward-moving spiral and then heads for the perimeter of the room. Once it hits an obstacle, it believes it has reached the perimeter of the room. It then cleans along the "perimeter" until it hits another obstacle, at which point it cleans around it, finds a clear path and proceeds to traverse the room between objects like walls and furniture until the allotted cleaning time is up. The idea appears to be that if it cleans for a certain amount of time, it'll cover the whole floor, but whether it actually achieves complete floor coverage is pretty much hit or miss.

Roomba can clean for about two hours on a single charge. If you have the self-charger, Roomba will return and connect to the charger all by itself when the battery power is low (the self-charger is sold as an add-on to the Roomba base model but comes included on most of the higher Discovery models). It accomplishes this using the infrared receiver on its front bumper. When the battery power gets low, the vacuum starts looking for the infrared signal emitted by the charger. Once it finds it, Roomba follows the signal and docks itself to the charger. Some robotic vacuums with this self-charging feature will head back out to resume cleaning once they're fully recharged.

So the Roomba is smart enough to clean your floors while you're at the movies, but there are still some decisions you need to make for it. First, you need to remove small obstacles from the floor so Roomba doesn't get stuck on them or try to suck them up. You also need to tell Roomba where it should not go. Using included virtual wall units, you can keep the robot within certain boundaries. Virtual walls send out infrared signals that Roomba picks up with the receiver on its bumper. When it picks up a signal from a virtual wall, it knows to turn around and head the other way.

Roomba's sensors allow it navigate your home with relative autonomy. Now let's find out how it accomplishes its real purpose: vacuuming. 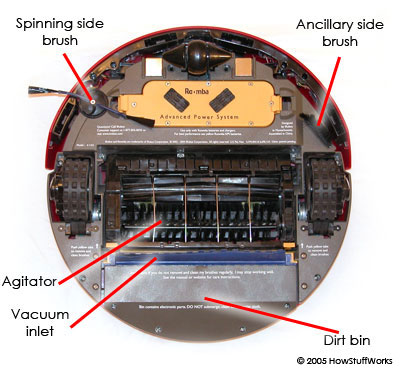 According to iRobot, more than half of Roomba owners name their little vacuuming buddy. Electrolux, the maker of the high-end Tribolite robotic vacuum, reports that it receives letters and pictures from families that own its product. Still, most people don't buy a robotic vacuum because they're looking for a low-maintenance pet. They buy it because their floors get dirty.

If you remove the agitator assembly, you can see two dirt sensors:

You typically need to empty the dirt bin at least once for each room the Roomba vacuums, and possibly two or three times depending on how dirty your floors are. Roomba doesn't know when the bin is full -- it just keeps going. There's a filter you'll need to replace when it gets too clogged, but there's no vacuum bag -- you just dump the bin and put it back in the unit.

As far as cleaning power goes, the iRobot Web site states that Roomba has "as much suction as a standard upright," although it offers no specifications. When HowStuffWorks tried out the Roomba Red, we found that it cleans quite well on hardwoods and linoleum, and it picks up a good amount of the dirt and pet hair on low- and medium-pile carpet. According to iRobot, Roomba is not intended for deep-pile carpet.

Now, when you're pushing a vacuum through your home, you make decisions. If you see that an area is especially dirty, you spend more time there. When you pass from the linoleum of the kitchen to the carpet in the dining room, you turn a knob on the vacuum so it can achieve its optimum efficiency on the type of floor its cleaning. As a robot, Roomba should be able to at least partially replicate a human's ability to clean effectively.

In order to figure out which areas need extra cleaning, Roomba Red has two dirt sensors located immediately above the agitator brush. These dirt sensors are acoustic impact sensors. When the agitator kicks up a large amount of dirt, the dirt causes more vibration when it hits the metal plates of the sensors. The sensors detect that increase and tell Roomba to go over the area again. To make the transition between floor types, Roomba's cleaning deck (which houses the agitator setup) automatically adjusts its height when it senses a half-inch (1.3-cm) rise in the floor surface.

One thing Roomba can do that a human and an upright vacuum can't is get completely under furniture. Because Roomba Red is only about 3.5 inches (9 cm) tall, it can easily get under most coffee tables, night stands, beds and some couches. The ability to clean under furniture is arguably one of the biggest draws of the robotic vacuum.

The Roomba Red is a handy device, but it's only one example of a vacuuming robot. In the next section, we'll check out some of the other robotic vacuums available today.

Check out Roomba in action! Watch this robotic vacuum clean, avoid stairs and charge itself in three videos provided by iRobot.

There are lots of vacuuming robots on the market, and all of them cover certain tasks -- most notably, they vacuum. Most models also feature some sort of obstacle-avoidance system and come equipped with a remote control. Beyond that, there are differences between products that account for the great range in price. Here, we'll discuss several robotic vacuums and their distinguishing characteristics.

As you can see from the pricier models, the trend in robotic vacuums is toward a more complete home robot that will do more than just clean your floor. Products sold as vacuuming robots are starting to offer additional features like Internet connectivity, home surveillance and air-purification. The future is likely to see home robots that download music, answer your phone and preheat your oven while they vacuum your house.

For more information on robotic vacuums and related topics, check out the links on the next page.