by Jonathan Strickland Jan 9, 2017
Two Google Home bots have been chatting about life and love on Twitch. Google/Urfinguss/Thinkstock

One of the more popular livestream feeds on Twitch right now focuses on a pair of nonhuman hosts conversing about pirates, the nature of God and who loves whom the most.

The hosts are two Google Home devices. Google intended these products to help answer simple questions like “how cold is it outside” or to interface with smart home technology. In this case, someone has repurposed the gadgets to hold an artificially intelligent conversation (with emphasis on the “artificially”).

The person behind the scenes isn't using two out-of-the-box Google Home units. The conversation would likely not last long if that were the case. Instead, the two AI entities draw upon software called Cleverbot. It's essentially a chatbot that responds to human statements. Over time, it can incorporate words and phrases people have submitted in previous conversations. In other words, it's a relatively primitive AI program that becomes more robust the more people use it.

Typically, the Google Home agent doesn't have a name other than “Assistant,” but for the purposes of this experiment the two gadgets are “Vladimir” and “Estragon.” If those names sound familiar, you're likely a theater geek — they're characters from Samuel Beckett's “Waiting for Godot.” In that play, Vladimir and Estragon have mercurial and absurd conversations about a variety of topics. The two Google Home devices seem to be following the same pattern.

At times, the conversation seems to take on a meaningful thread. At others, it's clear no real communication is happening between the two AI agents. And while this particular display of chatbots attempting to converse works well for streaming video, it's not exactly innovative.

Back in 2011, a company called Zabaware uploaded a video of two of its Ultra Hal AI agents having a conversation with each other. The two bots talked a lot about putting on weight, getting drunk and not wearing pants. They also got a bit handsy with each other.

But even this steamy conversation wasn't the first between two chatbots. Perhaps the earliest example of a conversation between two AI programs happened in 1973. It was between a program called ELIZA and another called PARRY. ELIZA mimicked a psychotherapist who would answer nearly any statement with a question. PARRY simulated the behavior of someone with paranoid schizophrenia.

Vinton Cerf, one of the architects of the internet, arranged for the two chatbots to meet (perhaps over a virtual cup of coffee). He used the ARPANET, a predecessor of the internet, to facilitate the conversation. You can read the exchange here. It's not a terribly interesting conversation.

One day, we may develop artificially intelligent personalities capable of holding a truly natural conversation. Should that day arrive, a conversation between two such agents should seem indistinguishable from any normal human conversation. For the time being, it seems safe to say that we're not there yet. But it's still entertaining!

Now That's Fun
Curious about Cleverbot? Try it out. We did with this phrase: “Snowboarding is way better than skiing.” Cleverbot’s response: “Sentry Turrets are better than security cameras." Thanks, Cleverbot!

Chatbot Delivers Justice, One Parking Ticket at a Time

Artificial Intelligence Is Getting So Smart, We Need It to Show Its Work 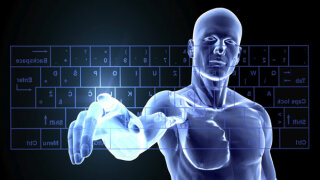