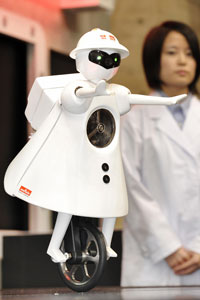 Vernor Vinge proposes an interesting -- and potentially terrifying -- prediction in his essay titled "The Coming Technological Singularity: How to Survive in the Post-Human Era." He asserts that mankind will develop a superhuman intelligence before 2030. The essay specifies four ways in which this could happen:

Out of those four possibilities, the first three could lead to machines taking over. While Vinge addresses all the possibilities in his essay, he spends the most time discussing the first one. Let's take a look at his theory.

Computer technology advances at a faster rate than many other technologies. Computers tend to double in power every two years or so. This trend is related to Moore's Law, which states that transistors double in power every 18 months. Vinge says that at this rate, it's only a matter of time before humans build a machine that can "think" like a human.

But hardware is only part of the equation. Before artificial intelligence becomes a reality, someone will have to develop software that will allow a machine to analyze data, make decisions and act autonomously. If that happens, we can expect to see machines begin to design and build even better machines. These new machines could build faster, more powerful models.

Technological advances would move at a blistering pace. Machines would know how to improve themselves. Humans would become obsolete in the computer world. We would have created a superhuman intelligence. Advances would come faster than we could recognize them. In short, we would reach the singularity.

What would happen then? Vinge says it's impossible to say. The world would become such a different landscape that we can only make the wildest of guesses. Vinge admits that while it's probably not fruitful to suggest possible scenarios, it's still a lot of fun. Maybe we'll live in a world where each person's consciousness merges with a computer network. Or perhaps machines will accomplish all our tasks for us and let us live in luxury. But what if the machines see humans as redundant -- or worse? When machines reach the point where they can repair themselves and even create better versions of themselves, could they come to the conclusion that humans are not only unnecessary, but also unwanted?

It certainly seems like a scary scenario. But is Vinge's vision of the future a certainty? Is there any way we can avoid it? Find out in the next section -- before it's too late.