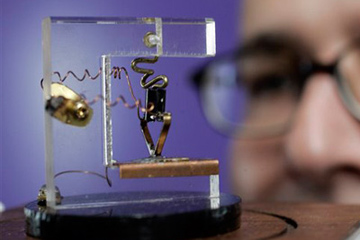 A replica of the first transistor. Moore's Law predicts the size of transistors will decrease by half every 24 months.
AP Photo/Paul Sakuma

The bridges to immortality tie into another of Kurzweil's hypotheses: the singularity. In a nutshell, the singularity is an era in which technological development is so rapid that the world is constantly evolving at a blistering pace. During this time, biology and technology will merge and humans will evolve into a new type of life form.

Today, Intel makes chips for consumer products that have nearly 1 billion transistors on them. This allows Intel to design processors that can handle increasingly heavy computational demands. Kurzweil's hypothesis somewhat depends upon this trend continuing. While scientists and doctors have made progress building artificial organs and even using 3-D printers to build real organs, we've got a long way to go to reach the level of mastery required to meet Kurzweil's vision.

Part of the challenge of describing digital immortality to someone is that you have to imagine technology that doesn't exist. For that reason, any discussion of digital immortality must remain somewhat vague -- it's all conjecture. It's possible such technology will never exist. Kurzweil describes what we need to do to conquer death -- we need to live healthy lifestyles, develop techniques to bolster or replace our organs and switch off all the genetic markers that govern aging. But knowing what we have to do and learning how to do it are two different things.

People, including Moore himself, have predicted the end of Moore's law several times over the years. But engineers have discovered new ways to stay true to the spirit of Moore's law, doubling the power of processors every two years or so. If this trend should finally slow down -- or worse, end -- it could take much longer to achieve immortality than Kurzweil's vision. It might not be possible to create the technological infrastructure necessary to engineer immortality at all.

Assuming that such technological advances are possible, there are other problems to overcome. How do you test the science? What sort of problems could arise? If we fiddle with genes that govern aging, will we run the risk of creating new degenerative conditions? Is there a cancer risk that comes along with eliminating cellular death? We can't really answer these questions yet. Kurzweil and his supporters believe that one day we'll answer all of these questions in time. Kurzweil calls his theory the Law of Accelerating Returns.

But there may be another way to achieve digital immortality. It involves getting to know your computer on an unprecedented level.