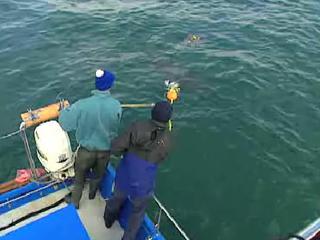 Curious about what else GPS technology is being used for? Check out these videos to learn about GPS applications in everything from shark tracking to weapons manufacturing.
Discovery

The benefits of basic GPS functions are clear if your passion is outdoor adventures such as backcountry hiking, sea kayaking or hunting; these tiny computers are tailor-made to help you get into the wilderness and make it back with less risk of getting lost. Just remember to pack a map and compass, and know how to use them; adventure lore is full of stories about GPS batteries dying at the worst possible moment.

Sports- and fitness-oriented users can also use wayfinding features to try a new running route or for training while traveling. But that only scratches the surface of what you can do with this high-tech training tool.

A GPS watch can measure your performance with a level of precision that was once only the domain of researchers and professional athletes. It's nice to know how long it took you to complete a half marathon, but a GPS watch can tell you exactly where in the 13.1-mile (21.1-kilometer) course you were fastest -- and slowest. With the data-download capability that's pretty much standard on these devices, you can compare each run to see trends in your performance. Maybe you'll notice that you lose too much time after Mile 10, or that you're not climbing hills as fast as you did on the same courses last year.

Once you identify these kinds of weak spots in your performance, the combined features in a GPS watch can give you on-the-fly feedback to make your training more specific and efficient. Many cyclists, for example, spend the first part of their preseason building cardiovascular strength with long, steady effort. This helps build a foundation for the rigors of sprinting and hill training later in the year. Tracking a "moderate pace" using perceived effort -- how you feel during the workout -- is a variable measure at best. Equip yourself with a GPS watch that can read data from a heart rate monitor, cadence sensor and wheel speed sensor, however, and you can fine tune every mile of your ride, keeping your effort within a precise range of speed, heart rate and time.

The results of this kind of specific training can be dramatic. If you're strapped for time, you'll now be able to get the most out of every minute of your workout. You'll consequently spend less time worrying about the balance of sport, family and work. And when game day arrives, you'll know exactly how hard you can push yourself, whether it's on the race course, trail or track. This is technology that will help you train smarter, not just harder.

Despite my deep passion for going fast on a bicycle, I've been slow to come over to the GPS-training-device camp. I do ride with a computer that tracks my speed, cadence, distance and heart rate, so I'm not a complete minimalist. But for a number of years, I viewed "the GPS thing" as one more pricey gadget that wouldn't be as beneficial as training harder with the tools I currently had. In fact, I'll admit to feeling really good every time I outsprinted a guy on a tricked-out bike with a GPS unit strapped to the handlebars.

But my perspective started to change this year during a summer time trial series. Every week, I joined a group of racers battling one-by-one against the clock on a flat 10-mile course. Seats and handlebars got adjusted centimeter by centimeter. Our conversations began to revolve around arcane details such as a few PSI of tire pressure (yes, it makes a difference) and the aerodynamic advantage of taping shut the vents on one's helmet (in the end, that one wasn't worth all the funny looks we got). One of my teammates ran a GPS unit all season, and could tell precisely where his speed increased, stayed consistent or dropped off. He used this to his advantage, mentally prepping himself for the harder sections of the course as I stuck tried-and-true to my "if it hurts, you must be doing something right" philosophy.

Our elapsed times were fairly close most weeks, but factor in that this guy's seven years my senior. He's a strong rider, but I'm no slouch; I've been into the sport longer than he has and my ego tells me I should be able to out-pace him. I have to think that the time he spent analyzing each ride with his Garmin trickled down to a tiny bit more efficiency. Maybe it was only a few seconds total, but that was all he needed to nip me by four places in the overall standings. And while I'm still passing guys with GPS units on a satisfyingly regular basis, getting passed by that one bike -- more than once -- may be enough to push me into the GPS club this season.