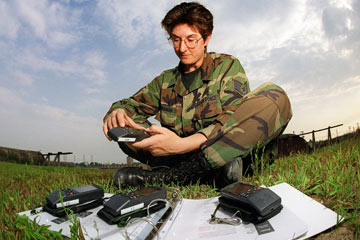 The access to dither-free GPS technology coincided with a revolution in electronics miniaturization -- think about how much less a modern laptop computer weighs than the one you were using in 1996. GPS developers embraced innovations such as surface mount technology (SMT), in which tiny components are soldered directly to a circuit board (rather than using wire leads to make connections), and robotic assembly that helped shrink the timing and signal processing chips at the heart of GPS receivers into miniscule components. Today they're almost too small to see clearly without magnification [source: Poole].

Researchers further shrank GPS units by applying fractal geometry -- which involves shapes made up of repeating, expandable patterns -- to design powerful receiver antennae that literally folded into miniscule spaces. This important (and once bulky) piece of the GPS receiver package became small enough to hide in the slim case of a smartphone -- or within the body of a watch [source: Rusu and Baican; Mikkola].

The first GPS watches were essentially small versions of handheld GPS units, measuring about 2 to 3 inches (about 50 to 75 millimeters) long and about 1 inch (25 millimeters) wide, with wrist straps attached. Even though they were indeed smaller and lighter than most other GPS units from the early 21st century, they were still large enough to make running long distances with one -- not to mention running to the coffee shop after a workout with the thing on your arm -- more trouble than it was worth for many athletes [source: Wollman].

Sports that hinge on knowing one's location relative to a target, such as golf, adopted GPS early in this miniaturization process. For example, well-known golf champion and course designer Greg Norman became an adviser with golf-related GPS products producer Inforetech in 2002 [source: GPS Industries]. But by and large, it took two technological steps for consumers to start adopting GPS watches on a wide scale.