The History of Sundials 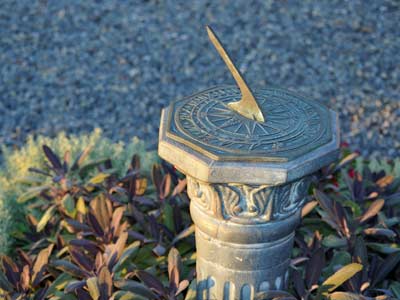 Though innocently situated in a peaceful garden, sundials can be much more deviously complex than they first let on.
© iStockphoto/Leslie Orgera

Sundials began as fairly simple devices, but as time passed they became more complex. Let's take a step back and examine some basic astronomy.

The Earth rotates around the sun, but it does so in an elliptical (oval) orbit, not a circular one. This means that when the sun is closer to the Earth, it appears to move faster across a sundial. In addition to this, the Earth's equator is not in line with its orbital path around the sun; it's tilted about 23.5 degrees off-kilter.

Taking the first of these two facts in hand, we find that the time given by a sundial (known sometimes as solar time or sun time) often differs from the time you'll read on your wristwatch (which can be called clock time or mean solar time). The variance can be up to about 15 minutes at different times throughout the year. This might not have been a huge cause for concern before the invention of mechanical clocks, but in the early days, sundials were often called upon to reset these timepieces when they wound down, so innovators had to alter the design of sundials slightly to accommodate.

Another astronomical factor to keep in mind has to do with the rotation of the Earth as it moves along its orbit. The idea may be hard to picture at first, so consider this: You're standing in your backyard, counting off the days from one day to the next. As the Earth is completing each of these revolutions, every 24 hours in that same period, it's also moving slowly along its orbit. Because of this orbital passage, the view from the nighttime side of the planet will see a slightly different display of stars every evening. Nowadays this phenomenon (called a sidereal day as opposed to a solar day) seems most commonly linked to the signs of the zodiac -- as it often was in ancient times -- but it was also another clue to figuring out how the sky could be used to predict events on Earth.

Two complications arise from the tilt of the Earth when it comes to sundials, having to do with longitude and latitude. In terms of longitude, most sundials need to be set up so they're exactly parallel with the axis of the planet to function properly. For example, people in the Northern Hemisphere need to find the North Pole and aim the gnomon along that line. But don't be too fast whipping out your compass unless you plan to do some quick calculations; the magnetic North Pole is shifty. To find the proper orientation you can also use the alignment of the stars; Polaris, the current North Star, lies at the north celestial pole, and that can show you the way.

Latitude also poses a challenge if a sundial is set up at a different latitude than the one it was created for. Chances are good it will need to be carefully angled to function properly. Even more complicated are the time markers on the dial, which may not be properly spaced to accurately tell time -- that takes trigonometry to figure out.

The next page, we'll take a look at telling time in the ancient world and the evolution of ancient sundials.