Browse the article How Breathalyzers Work 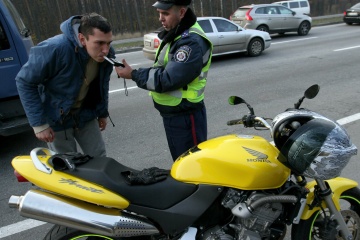 Did you really pay attention to how much you drank before you got on the road, or are you just guessing? Don't worry, the police can help you out with that.
ANATOLII BOIKO/Stringer/Getty Images

We hear and read about drivers involved in an accident who are later charged with drunken driving, and usually a news report on the accident will say what the driver's blood alcohol level was and what the legal limit for blood alcohol is. A driver might be found to have a level of 0.15, for example, and the legal limit is 0.08. But what do those figures mean? And how do police officers find out if a driver they suspect has been drinking is actually legally drunk? You have probably heard about the Breathalyzer, but may wonder exactly how a person's breath can show how much that person has had to drink.

­It is important for pu­blic safety that drunken drivers be taken off the roads. Of the 42,000 traffic deaths in the United States in 1999, about 38 percent were related to alcohol. Drivers who can pass roadside sobriety tests -- they can touch their noses or walk a straight line -- still might be breaking the legal limit for blood alcohol and be a hazard on the road. So police officers use some of the latest technology to detect alcohol levels in suspected drunken drivers and remove them from the streets.

­Alcohol intoxication is legally defined by the blood alcohol concentration (BAC) level. However, taking a blood sample in the field for later analysis in the laboratory is not practical or efficient for detaining drivers suspected of driving while impaired (DWI) or driving under the influence (DUI). Urine tests for alcohol proved to be just as impractical in the field as blood sampling. What was needed was a way to measure something related to BAC without invading a suspect's body.

Let's take a look at what these tests are based on.

­Alcohol that a person drinks shows up in the breath because it gets absorbed from the mouth, throat, stomach and intestines into the bloodstream.

Because the alcohol concentration in the breath is related to that in the blood, you can figure the BAC by measuring alcohol on the breath. The ratio of breath alcohol to blood alcohol is 2,100:1. This means that 2,100 milliliters (ml) of alveolar air will contain the same amount of alcohol as 1 ml of blood.

For many years, the legal standard for drunkenness across the United States was 0.10, but many states have now adopted the 0.08 standard. The federal government has pushed states to lower the legal limit. The American Medical Association says that a person can become impaired when the blood alcohol level hits 0.05. If a person's BAC measures 0.08, it means that there are 0.08 grams of alcohol per 100 ml of blood.

There are several different devices used for measuring BAC.

There are three major types of breath alcohol testing devices, and they're based on different principles:

Regardless of the type, each device has a mouthpiece, a tube through which the suspect blows air, and a sample chamber where the air goes. The rest of the device varies with the type.

To measure alcohol, a suspect breathes into the device. The breath sample is bubbled in one vial through a mixture of sulfuric acid, potassium dichromate, silver nitrate and water. The principle of the measurement is based on the following chemical reaction:

The silver nitrate is a catalyst, a substance that makes a reaction go faster without participating in it. The sulfuric acid, in addition to removing the alcohol from the air, also might provide the acidic condition needed for this reaction.

During this reaction, the reddish-orange dichromate ion changes color to the green chromium ion when it reacts with the alcohol; the degree of the color change is directly related to the level of alcohol in the expelled air. To determine the amount of alcohol in that air, the reacted mixture is compared to a vial of unreacted mixture in the photocell system, which produces an electric current that causes the needle in the meter to move from its resting place. The operator then rotates a knob to bring the needle back to the resting place and reads the level of alcohol from the knob -- the more the operator must turn the knob to return it to rest, the greater the level of alcohol.

The Chemistry of Alcohol

The alcohol found in alcoholic beverages is ethyl alcohol (ethanol). The molecular structure of ethanol looks like this:

where C is carbon, H is hydrogen, O is oxygen and each hyphen is a chemical bond between the atoms. For clarity, the bonds of the three hydrogen atoms to the left carbon atom are not shown.

The OH (O - H) group on the molecule is what makes it an alcohol. There are four types of bonds in this molecule:

The chemical bonds between the atoms are shared pairs of electrons. Chemical bonds are much like springs: They can bend and stretch. These properties are important in detecting ethanol in a sample by infrared (IR) spectroscopy.

Diagram of the Intoxilyzer

Molecules are constantly vibrating, and these vibrations change when the molecules absorb IR light. The changes in vibration include the bending and stretching of various bonds. Each type of bond within a molecule absorbs IR at different wavelengths. So, to identify ethanol in a sample, you have to look at the wavelengths of the bonds in ethanol (C-O, O-H, C-H, C-C) and measure the absorption of IR light. The absorbed wavelengths help to identify the substance as ethanol, and the amount of IR absorption tells you how much ethanol is there.

Diagram of the Intoxilyzer

­Moder­n fuel-cell technology (which may power our cars and even our houses some day) has been applied to breath-alcohol detectors. Devices like the Alcosensor III and IV use fuel cells.

The fuel cell has two platinum electrodes with a porous acid-electrolyte material sandwiched between them. As the exhaled air from the suspect flows past one side of the fuel cell, the platinum oxidizes any alcohol in the air to produce acetic acid, protons and electrons.

The electrons flow through a wire from the platinum electrode. The wire is connected to an electrical-current meter and to the platinum electrode on the other side. The protons move through the lower portion of the fuel cell and combine with oxygen and the electrons on the other side to form water. The more alcohol that becomes oxidized, the greater the electrical current. A microprocessor measures the electrical current and calculates the BAC.

Operators of any breath alcohol testing device must be trained in the use and calibration of the device, especially if the results are to be used as evidence in DWI trials. Law enforcement officers can carry portable breath testing devices that use the same principle as full-size devices. Court cases can turn on the perceived accuracy of a breath test, however, so prosecutors rely on the results obtained from full-size devices.

For more information on Breathalyzers and related topics, check out the links on the next page.

If you strip off hydrogens from the right carbon of ethanol in the presence of oxygen, you get acetic acid, the main component in vinegar. The molecular structure of acetic acid looks like this:

where C is carbon, H is hydrogen, O is oxygen, the hyphen is a single chemical bond between the atoms and the || symbol is a double bond between the atoms. For clarity, the bonds of the three hydrogen atoms to the left carbon atom are not shown. When ethanol is oxidized to acetic acid, two protons and two electrons are also produced.