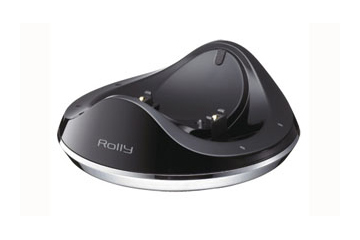 Rolly couldn’t dance while it was in its cradle, but it still played music while its battery charged.
Courtesy Sony

Rolly's bitty size and weird shape might lead you to believe that it lacks serious technological punch. But you'd be wrong.

Sony loaded the Rolly with 2GB of internal memory. That was enough capacity to store more than 34 hours of music loaded at a quality of 128 kbps (kilobits per second) or nearly 14 hours of even higher-quality 320kbps audio.

Suffice it to say that your music collection would have outlasted the battery, which was rated for about five hours of music-only playback or four hours of music and dancing function. You refreshed the lithium-ion battery by resting Rolly on a charging cradle.

You could use a USB cable to transfer music to the internal memory, but you didn't have to stop there. Rolly had a Bluetooth receiver with a 10-foot (3-meter) range, meaning you could stream music directly from any Bluetooth device, such as a smartphone or laptop.

Sony gave the Rolly two wheels, one at each end of the device. These rubbery wheels worked in harmony to rotate and spin in all sorts of patterns. Just adjacent to the wheels were embedded LEDs (light-emitting diodes) that changed color and flashed to the beat of your favorite Alabama 3 tune.

The Rolly didn't have a headphone jack; it just wasn't meant to be an idle personal music player. Instead, it had two 0.7-inch (20-millimeter) speakers. And those speakers, dear reader, are where Rolly unveiled its true spirit.

When you started a song, little arms near the speakers automatically unfolded from Rolly's body, like hinged ears. As the music began, the arms began flapping frantically to a wild disco beat, or more slowly to a gentle Norah Jones crooner. If you wanted, you could've spent roughly $15 to change out the plain white or black arms for more exciting hues.

One of Rolly's key components was an accelerometer, which detected when the device was vertical or horizontal and subsequently changed how Rolly responded to commands. In a vertical position, the top wheel let you change songs and the bottom wheel adjusted volume. To shuffle songs, you just pressed the Rolly's "play" button and -- appropriately -- began shaking the device.

The Rolly would dance its little digital heart out for you by responding automatically to the beat and style of music you favored.