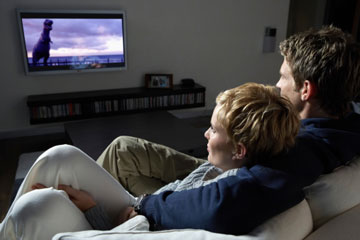 In simpler times -- say, the mid-1980s -- when you wanted to see a movie, you had two choices. You could go to a theater to enjoy the car chases and love scenes on an expansive screen, and hear the soundtrack on a big powerful public-address system. Or, you could save a few dollars, rent a video cassette at the local store, stick it in a player attached to your TV, and watch a movie with a smaller picture and tinny sound.

Since then, things have changed radically, with the advent of huge high-definition TV screens, sophisticated audio technology that creates vivid sound, and broadband Internet connections that allow you to stream content to augment the vast selection of DVDs or Blu-ray discs you can buy or rent. Back in 2005, a poll found that 73 percent of adults preferred watching movies at home instead of plunking down a few bucks for a theater ticket [source: Associated Press].

Nowadays, movie lovers are confronted with a different, perhaps even more complicated dilemma than whether to rent a movie or head to the theater: What sort of audio equipment should you buy to go with your HD flat-panel monitor? To retailers and reviewers, the term home theater system usually refers just to the sound portion of your setup, which typically is sold separately from the TV [sources: CNet.com, BestBuy.com]. That includes a Blu-ray player and/or other devices that decode digital content, plus some sort of amplifier to create a nice big sound, and a set of "surround sound" speakers that distribute the sound around the room to create the illusion you're smack in the middle of the action.

Before you even get to ponder which brand name is best, or which local big-box store or home electronics Web site is likely to give you the best deal, you have to decide which of two basic approaches is best suited for your needs. Should you shop for the best individual components and then assemble them into a custom system? Or, does it make more sense simply to buy one of the many all-in-one systems on the market?

In college, did you have an audiophile roommate who spent every free moment trying to come up with the perfect combination of speakers, amplifier and preamplifier that would turn your tiny dorm room into the equivalent of Carnegie Hall? (That insatiable obsession with aural nuances seemed so puzzling, considering that he used it mostly to listen to Mötley Crüe.)

Since home theater is to today's electronics lovers what stereo was back in the day, it probably comes as no surprise that some consumers choose to mix and match individual home theater components in an effort to create the ultimate system -- or at least one that most closely suits their tastes.

Within the world of component, there are even more choices. You put together a basic component system, which includes speakers,a disc player and/or some other content source, and a device called an audio/video receiver, which amplifies and balances the digital sound from your content and sends it to the speakers [source: Dolby.com].

If you're really an electronics purist, though, you'll want to break down the functions of your system into even more parts, so you can further fine-tune the resulting aural experience. That means opting for further separates, as they're called, such as a preamplifier/processor and a power amplifier, instead of a receiver [source: Dolby.com]. You may also add another device, called an equalizer, which boosts some frequencies and suppresses others to tweak the recorded music and make it sound more like what the musicians played in the studio.

There are definite advantages to going the component route. If you're really into music as well as movies, for example, you'll want high-end components that you can tweak to get the most accurate sound reproduction. You can better tailor your system to fit the particular acoustics in your home. You also can upgrade easily, swapping in more powerful or precise next-generation components, or expanding your setup to add features such as a digital-based music hub. And finally, if you've got the bucks, you can get the absolute best in high-end equipment [source: Miller].

The downside is that shopping for and buying separate home theater components can be time-consuming and expensive. Count on spending at least $1,000 for a basic configuration of components, and $3,000-plus for the more intricate stuff [source: Dolby.com]. Additionally, unless you're a techie, figuring out how to connect all the pieces and getting them to work together can be a trying chore [source: Consumer Reports]. 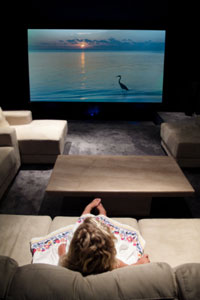 Consider the following factors when choosing between getting an all-in-one system and separate home theater components:

Budget: This one's a biggie, because you can only get a system that's as big and elaborate as your bank account or credit-card limit can handle. If you're of limited means or the frugal sort, an all-in-one system can be had for as little as $200, though one that contains an integrated Blu-ray player probably will cost $400 or more [source: Consumer Reports]. And like we said before, if you opt to go with components, count on spending at least $1,000 for basic stuff, and $3,000-plus for the more intricate stuff [source: Dolby.com]. The sky's pretty much the limit.

Your space: If you live in a cramped college dorm room, a component array with seven speakers isn't going to sound appreciably better than a simple all-in-one system. But if you're planning to watch movies with your buds in that sprawling man-cave in your basement, you probably need a component system to get the most out of "Transformers: Dark of the Moon" [source: Dolby.com].

Tolerance for technical complexity: If you're a circuit-head who obsessively tweaks settings and enjoys playing with complicated features, components are the way to go. But if you like to just take something out of the box, plug it in, and then throw away the instruction manual, an all-in-one system should be your choice.

I'm fascinated with technology and I love movies, but I'm also a bit of a tightwad. So, over the years, I've experimented with various improvised, low-tech sorts of home theater setups. For about a decade, my wife and I had an old-fashioned, 20-inch cathode-ray TV set, whose audio outputs I ran through an equally ancient 20-watt stereo receiver and a pair of cheap two-way Advent speakers that I think I got at a yard sale. When the picture tube finally started to go, I reluctantly went out to a big-box store and picked up a cheap off-brand 21-inch HDTV. In addition to the connections for our cable box and DVD player, I was excited to discover that it also had an old-fashioned VGA port. That enabled me to hook it up to an old laptop, which I then also plugged in to the Ethernet router on our home computer network. That enabled us to watch streaming content -- YouTube, Netflix, movies and TV episodes downloaded from Amazon or iTunes -- as easily as if I'd gone out and bought one of those state-of-the-art Internet TVs. I'm still trying to figure out how to use the laptop as a digital video recorder as well.