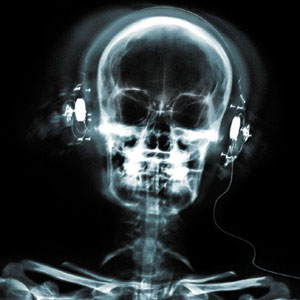 Bonephones transmit sound through the bones in the skull rather than through the outer ear and eardrum.
Digital Vision/Getty Images

Bone-conducting headphones began to show up on the consumer market in the early 2000s, and since then, they've gained popularity. For potential purchasers, the key question remains: Do they really protect your ears from damage? The answer seems to be "yes." Deborah Price, a doctor of audiology and vice-chair of the Audiology Foundation of America, told Wired in 2004 that bone conduction is "very safe" [source: Weir].

Whether bonephones sound as good as conventional earphones or ear buds is a trickier question to answer. Some users complain that the sound just isn't as good as with conventional air conduction. Ars Technica reviewer Ben Kuchera, for example, wrote in 2009 that one brand of bonephones gave him "a tinny, low-volume sound" with no discernible bass and a lot of distortion, particularly when he raised the volume so that he could hear individual voices in a podcast [source: Kuchera].

Since bonephones are relatively new, scientists are still studying the technology to determine how well we can hear with them, whether they present certain sounds better than others, and how well they can reproduce the illusion of three-dimensional sound. But already, some of their findings make the technology look pretty promising. Skeptics have contended that lateralization, also known as stereo separation -- that is, the illusion that different sounds are coming from different locations -- isn't possible with bone conduction. But recent research by scientists at the Georgia Institute of Technology scientists found that subjects equipped with bonephones actually heard as much lateralization as they would through conventional headphones placed over the ear. The same researchers are working on ways to further improve the 3-D quality of bone-conducted sound [source: Walker and Stanley].

Only time will tell whether bone-conducting headphones eventually deliver a higher quality of sound. In the meantime, bonephones serve as a perfectly viable alternative for headphone users who are concerned about potential hearing damage caused by ear buds.