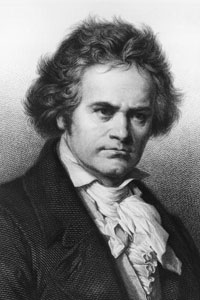 Ludwig van Beethoven may have been one of the first people to develop a device for hearing through bone conduction.
Hulton Archive/Stringer/Getty Images

Once the 20th century age of electrically amplified sound hit, inventors started developing bone conduction hearing devices to aid people with hearing loss, or who had to work in loud environments. In 1935, for example, inventor Edgar Hand was granted a patent for a special telephone equipped with a headband that attached the receiver to a user's head, so that it could transmit the vibration of a caller's voice through the bones [source: Hand]. In the 1940s and 1950s, numerous inventors patented hearing aids that utilized bone conduction. In 1957, Clairdon Cunningham, an engineer for defense contractor General Dynamics, even used the principle of bone conduction to develop an ingenious communication helmet that could be worn by pilots who had to converse over the roar of jet engines [source: Cunningham].

In the early 1980s, an inventor named James P. Liautaud was granted a patent for a device that enabled people to listen to the radio or taped music while skiing, running, bicycling or doing other active sports, without wearing headphones that might interfere with their safety. He patented a music player that a user wore in a belt around his or her waist. Wires from the device were connected to tiny speakers, which were attached to clothing over the user's collarbone. While the music actually could be heard through the ears, bone conduction was involved as well [source: Liautaud]. In 1994, another inventor, H. Werner Bottesch, took the concept a bit further and received a patent for a set of stereo music headphones designed for bone conduction. His device attached just behind the user's outer ears, so that it transmitted sound through the mastoid bones of the user's skull. Bottesch also came up with the idea of selectively amplifying certain frequencies of sound that don't transmit through bone as well as others [source: Bottesch].

Since then, bonephones have become even more sophisticated. But are they a safer alternative than ear buds to protect your precious ears?