by Terri Briseno
Prev NEXT
1 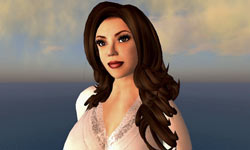 While avatars (like this one from the game Second Life) and surrogates were once just the stuff of games, virtual reality and computer interfacing, now they're taking on more active roles as replacements for living, breathing humans.
Tina Stallard/Getty Images

Maybe you aren't comfortable with all of the futurist predictions and even the current rate of technological advance, and that's OK. You can be yourself and interact in the world in a fairly low-tech way while allowing a surrogate, avatar or robot to live your online and tech life for you. Even the U.S. Defense Advanced Research Projects Agency (DARPA) has budgeted millions of dollars to create avatars that will act as surrogates for real, live soldiers [source: Ackerman].

While avatars and surrogates were once the stuff of games, virtual reality and computer interfacing, they are taking on more and more active roles as replacements for living breathing humans. Or, are they enhancements for humans?

Fully-realized robotic machines have become more and more widespread in medical technology and scientific development, both in the lab and in hospitals, enabling those with paralysis to move limbs, for instance. "Living" life with 'second life' surrogates is likely to become more and more common every day for those of us in less specialized fields, too.

Author's Note: 10 Futurist Predictions in the World of Technology

I think I'm too 21st century to be any 20th-century good. It's a pleasure to install and write instructions for peripheral devices or software, but I recently lost my cool trying to get a rabbit-ear antenna to work with a TV. Low tech and bad design make me batty, science fiction is not my thing, but the stuff of real science merging with technology! Definitely. Maybe least desired on futurist prediction lists, however, is anything involving dark networks. In that instance I do like the low-tech image of a light bulb going on above someone's head, not a faceless and gloomy underworld of tech-savvy ne'-er-do-wells using their genius for evil.