by Terri Briseno
Prev NEXT
10 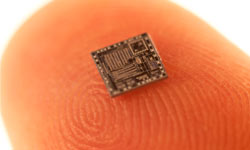 Computer brains (or chips) have diminished in size -- some powered by just five atoms, and one-atom developments about 10 to 20 years down the road.
Lucidio Studio Inc./Getty Images

No one wants to be called a zero in terms of intelligence, but having zero-sized intelligence in computing means packing a whole lot of brains in a tiny, tiny package. Computer companies encourage forward-thinking creativity, and some, such as Intel, even have futurists on board to predict where technology is headed. Futurist Brian David Johnson sees the future advance of computing to so small a size that the housing for the computer itself is almost zero. We have the technology to put computers almost anywhere and in almost anything. Computers used to take up entire rooms, then whole desktops, laps and palms, to micro-chip-sized casings and atom-powered transistors invisible to the naked eye [source: Seligson]

Many have predicted that the shrinking of computing size would also lead to the end of something called Moore's Law. Gordon E. Moore, a co-founder of Intel, famously predicted that every two years the number of transistors on a chip will roughly double every 24 months. As computer brains have diminished in size -- with some models powered by just five atoms and one-atom developments about 10 to 20 years down the road -- getting smaller may reach an end point as atomic transistors replace chips. Whether the low cost will trickle down despite the high cost of innovating such small transistors remains to be seen [source: Menegaz].