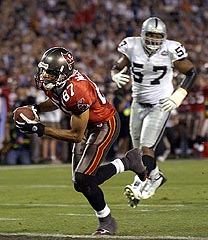 At most sporting events and concerts, people tend to want the best seat available. But where exactly is that seat? You could argue that the best seat is not even at the event itself, but in your home, watching the event on television.

Television viewers have always had an advantage over ticket holders when it comes to watching football games, as well as many other sporting events. Unlike most fans in attendance at the event, fans at home are able to watch spectacular or controversial plays over and over again thanks to instant replay technology. For the most part, the technology behind the instant replay has changed very little since 1964 when it was first debuted.

A technology called EyeVision has revolutionized the way we think of instant replays. This unique view of the action featured a camera "flying" around the field during plays. In this article, we will look at how the EyeVision system works and where you might be seeing it next.

The EyeVision system is a set number of digital video cameras arranged around the playing surface. In the case of Super Bowl XXXV, there were 30 cameras placed around the top of Raymond James Stadium in Tampa Bay, Fla. The cameras were spaced at seven-degree intervals, giving a 210-degree view around the playing field. A full 360-degree view is possible; however, it was decided to use a smaller setup in EyeVision's first broadcast.

Each camera is mounted on a robotic platform capable of precisely panning and tilting the camera in any direction. The camera's zoom focus, and the platform's pan and tilt capabilities, are computer controlled from the production truck. One camera is designated as the master camera. Using a simulated camera on top of a pan/tilt tripod, the camera operator follows the action with the master camera. By acquiring the zoom, focus, pan and tilt data from that camera, a computer can mathematically calculate what every other camera's variables should be in order to capture the same range of action on the field from different angles. A computer controls these cameras automatically. The result is a set of 30 different video sequences of the same action, covering a 210-degree range of view. These sequences are recorded on digital tape decks and time stamped in order to be collated and played back for the home viewer.

Once the video is stored in the tape decks, it can be replayed to television. The original intent of EyeVision was to produce an effect like that portrayed in the movie "The Matrix," where the camera seemed to pan 360 degrees around the main actor while he floated in midair or dodged a bullet. However, during testing, the developers working with the hardware found a better use of the system: To follow the play with one camera, pause the tape, rotate around the play (perhaps from one sideline to the other) to get a better angle of the action and then restart the replay. The bank of cameras allow the replay technicians to have an alternative to simply cutting from one replay angle to another by using EyeVision's smooth rotation capability.

This method worked extremely well this year in the Super Bowl when a runner dove over the goal line and fumbled the ball (click here to see the play). EyeVision was able to follow the play from behind and, as the player crossed into the end zone, pan around to an angle perpendicular to the goal line to show that the player still had control of the ball as it passed over the goal line, resulting in a touchdown.

Along with Princeton Video Imaging and Core Digital Technologies, CBS is creating a new company that will support EyeVision's new technology and sell it to television networks. EyeVision could be effectively utilized in numerous sports. Imagine being able to watch a figure skater perform a triple loop while the camera pans a full 360 degrees around her, mid-flight. Or watch a basketball player dribble down the court to hit a last second shot as the camera spins from a view behind him to a view from behind the basket, all without losing focus on the play.

In addition to its entertainment value, EyeVision might also be of use to the sporting events themselves. For example, in 1999, the National Football League reinstated instant replay rules into the game. This allows the game's officials to determine the proper call in critical situations. The ability to see a replay from all angles could be of great use in determining whether a player fumbled, or whether a receiver had possession of the football before hitting the ground.

The hardware and software that drive the replay system will only get better. The introduction of interpolation, or tweening, between the individual camera shots will make the rotation around a scene smoother. Interpolation involves using mathematical algorithms to seamlessly blend between camera shots so that the rotation around the camera's target will be smoother than it is with just the 30 camera shots. Also, with the further integration of High Definition television (HDTV) into the marketplace, an upgrade of the entire system to HD resolutions will mean a much clearer picture to the home viewer. With the combination of HDTV and EyeVision in the future, you will be able to experience televised sports like never before.

How to Connect a DVD Player to a TV
Is the sound on vinyl records better than on CDs or DVDs?
What were the first HDTVs?