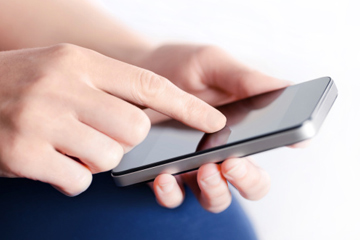 Swiping, sliding and tapping your fingers on a touch screen is a gratifyingly speedy way to navigate. But the smudges that get left behind aren't so appealing.
iStockphoto/Thinkstock

Beneath our polished digital world -- where phone calls can be made on a device that delivers you the New York Times, the weather and your favorite TV shows, easy as pie -- lurks a problem that is decidedly low-tech. Manufacturers have solved how to take clearer pictures and play music with the same quality as an mp3 player. They've streamlined the design. Heck, they've even found a way to make your fingers electro-magnetic sensors that manipulates the information on your screen.

And that's where our low-tech annoyance arises. Although our fingers are useful for tapping and swiping at our screen, they're also dirty. The more we manipulate our phone, the less pristine, sleek and advanced it appears. With all the progressive electronics under the hood of our touch screens, will there ever be a way to create a touch-screen phone, tablet or monitor free of the smudges, dirt and grime we carry around on our hands?

One solution is a self-cleaning paint. Titanium dioxide (used in sunscreens and cosmetics) is being studied for its ability to destroy microbes and germs on contact. Researchers believe that adding titanium dioxide to the surface of the touch screen could result in the reduced appearance of the oils that slough off your fingers.

Scientists in Germany have been developing a superamphiphobic surface, one that repels both water and oils. In a messy irony, they used soot to cover the surface they were testing, and then blasted it with heat to harden using a chemical process called calcination. What resulted was a surface where oils and water rolled off into droplets, leaving no trace behind. Japanese company Toray also has introduced a film that includes a wet coating where fingerprints won't stick, and an oil-repelling material for good measure.

Of course, there are ways to clean your screen in the meantime. You can certainly buy covers that will protect the screen from your fingers, but possibly at the risk of losing some of the clarity you see when you're using the screen. Follow those directions about using soft cloths when wiping down your screen, and if you need something a bit stronger, spray the rag with distilled water or even a 50 percent mixture of water and vinegar.

Let's also acknowledge that Apple has already addressed this issue to some extent with an oleophobic (oil-repelling) touch screen. A patent filed in February 2011 is believed to improve upon the method currently being used. We'll just have to wait and see if it gets the job done.

My grimy hands need the new technology fast. While the vinegar and water wipe-down does the trick, nobody likes the idea of dousing their phone in liquid. There's been a lot of rumors about the newest iPhone having fingerprint-proof screens, and I'm all for it. Obviously, it's only a matter of time before we have a sleek, unpolluted screen that matches the design of our phones and tablets.