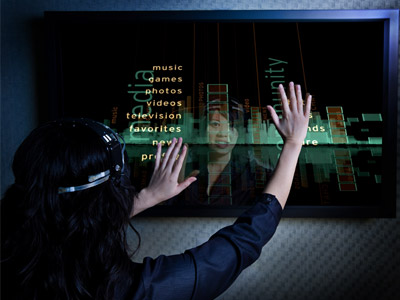 The Emortal works as an online portal that players can use to download more games and encounter other users.
Image courtesy

Emotiv hopes the excitement about its thought-controlled gaming technology will live on forever in the Emortal, an online portal for players. Here, people can walk through a cityscape and find new applications and games to download. They can also encounter community spaces and chat with other players. People can even upload their own music and photos on the Emortal.

­If the EEG gaming technology eventually catches on, it could revolutionize the way people think about video games in much the same way the Nintendo Wii did (or perhaps more). On the one hand, with its facial expression interpretations, the Emotiv EPOC attempts to close the gap further between the real world and the virtual world to create a more realistic experience, much like the Wii does. On the other hand, the Emotiv EPOC also tries to bridge the gap between human thought and the outside world to create an experience that's less like reality and more fantastical and dreamlike. The technology behind EPOC eliminates the middleman of motion altogether -- a staggering thought to consider.

It makes sense, then, that Emotiv and IBM have announced they want to pursue the possibilities of this technology beyond just the world of video games. One idea is that people would be able to experience realistic virtual training with the Emotiv technology. Time will tell if the EPOC and similar technology will extend beyond the gaming market or even permeate the gaming world at all.

But not everyone is as excited as IBM to see the world dive into this kind of technology. Though there are certainly plenty of gamers who are excited to usher in an age of thought-controlled video games and interfaces, there are others who find the whole idea, and even the ex­perience of playing it, "unnerving" [source: Reed]. Some question the possible harmful applications of such devices. Should researchers continue making more breakthroughs to advance EEG technology, it could plausibly lead to computers that can, in essence, read someone's mind. Those with the technology could be privy to the private thoughts, opinions and emotions of others. Granted, this could be very far off, considering where the technology (and our understanding of the human brain) is now. Nevertheless, we can't rule out the possibility entirely. Perhaps we shouldn't dismiss the prospect of Thought Police (like that in George Orwell's "1984") as mere alarmism.

Regardless, if you're just interested in developing the Yoda in you and lifting rocks with your mind, you can expect the Emotiv EPOC to come out in 2009, for an expected cost of about $299.