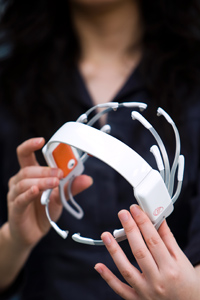 The Emotiv EPOC headset usesseven pairs of electrodes that­ read your thoughts and play the video game.
Image courtesy

As electroencephalogram (EEG) readings get more sophisticated and our understanding of the brain advances, scientists can delve further into the meaning of the scratchy graph. If the test can convey more than just the evidence of a medical abnormality and actually interpret a patient's thoughts, it can have wider implications. If you remember, the presence of beta waves indicates that a mind might be particularly excited or stressed. It turns out that people emit certain patterns of brain waves in conjunction with particular emotions or even thoughts.

Researchers have been working to develop EEG technology specifically for people living with loss of muscle control. The idea is that, when the technology is perfected, patients with paralysis will be able to control things through a computer using only their thoughts. They would be able to type e-mails or adjust the thermostat with mere concentration [source: Singer]. Another application can offer a person suffering from paralysis a virtual reality and an avatar through which he or she can move vicariously.

­ Emotiv Systems, the company behind the new EPOC, has applied this technology to the gaming world so everyone can experience it. The company claims it has developed the first high-fidelity brain computer interface (BCI) that reads and interprets both conscious and nonconscious thoughts as well as emotions [source: Emotiv]. The headset also processes facial expressions. According to Emotiv, the range of the system spans 30 different expressions, emotions and actions. The emotion of boredom, the facial expression of smiling and the thought of pulling are just a few examples of things the system picks up on and translates to your avatar's actions on the screen.

­­The EPOC headset incorporates 14 extensions of electrodes (seven pairs), mostly centered around the front of the scalp. But rather than using the wires of traditional EEG tests, the headset is completely wireless, allowing the player free, natural movement. To go along with that, the headset also includes a gyroscope that allows the player's head motions to control the camera or curser. In a doctor's office, it might take a sticky gel to keep the electrodes in place, but the EPOC headset fits on your head similar to the way headphones do. The system costs significantly less, too -- instead of the tens or hundreds of thousands of dollars that EEG machines usually cost, the EPOC costs only a few hundred [source: della Cava].

But all people seem to have unique patterns of brain waves. So how can the Emotiv EPOC read yours? We'll find out next.

EPOC isn't an acronym -- it's a play on the word "epoch," which refers to a time of momentous technological development or beginning of important era [source: Wasowski].