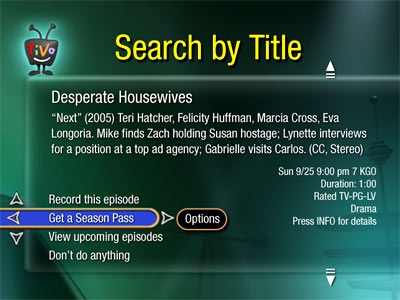 One of the main features of a DVR, and one that is hyped heavily in product advertisements, is the ability to "pause live television." This feature has caused more than a few people to scratch their heads, wondering exactly how this is done.

The phrase "pause live TV" is a bit misleading. DVRs are constantly recording to a live TV buffer. When you hit the pause button on a DVR remote, it freeze-frames the current image, giving the appearance of a paused videotape. When you hit play (un-pause), the recorded program begins playing.

DVRs generally keep the past hour or so in the buffer. This means that if you walk into the room 10 minutes into a movie, you can rewind it and catch the beginning -- provided the DVR was on the desired channel (the buffer is emptied each time you change the channel, and the DVR starts recording again).

Some of the most desirable features of DVRs are the tools they offer to help you find the programs you want to record.

All DVRs offer search tools of some sort, usually by name of program, name of actors, and in some cases more sophisticated options such as keyword searches.

The TiVo service offers two functions aimed at people who know what they want to watch: Wish Lists and Season Passes. Wish Lists allow you to type in (using an on-screen keypad) names or keywords that you want to keep an eye out for. For instance, a Wish List might look for everything starring Frank Sinatra, or any animated program with the word "dragon" in the title.

Season Passes allow you to tell the machine to record every instance of a single program, with the option of some advanced specifications. For instance, you can simply tell it to always record "Law and Order," or you can tell it to only record first-run episodes.