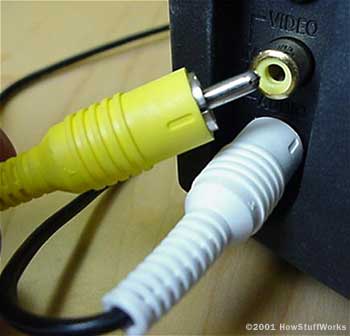 To understand digital TV, it's helpful to understand analog TV so that you can see the differences. (If you've read How Television Works, then you know how analog TV works).

The analog TV standard has been in use in the United States for about 50 years. To review quickly, here are the basics of analog television transmission:

This final signal, containing the color and intensity of each pixel in a set of rows, along with horizontal and vertical sync signals, is called a composite video signal. Sound is completely separate. When you look on the back of your VCR and you see the yellow plug, that's the plug for composite video. Sound is either a white plug (on VCRs that do not handle stereo sound) or a red plug and a white plug (on VCRs that do handle stereo).

There are lots of different things you can do with a composite video signal and a sound signal. Here are just a few:

When a composite video signal is broadcast over the airwaves by a TV station, it happens on a specific frequency. In the United States, we know these frequencies as VHF channels 2 through 13 and UHF channels 14 through 83.

The composite video signal is transmitted as an AM signal and the sound as an FM signal on these channels. See How TV Works for details on transmission, and How Radio Works for details on AM and FM. The FCC allocated three bands of frequencies in the radio spectrum, chopped into 6-MHz slices, to accommodate these TV channels:

When your VCR wants to display its signal on a normal analog TV, it takes the composite video signal and the sound signal off the tape and then modulates those signals onto a 60-MHz (channel 3) or 66-MHz (channel 4) carrier, just like a TV station would. Instead of broadcasting it, however, the VCR sends it straight to the TV. A cable box or satellite box does the same thing.

Right now you hear a lot about "digital satellite systems" and "digital cable systems." The set-top box receives a digital signal from the satellite or cable; the box then converts that signal to an analog signal and sends it to your analog TV. That's why if you're a digital cable or satellite TV subscriber, your provider probably told you that the June 2009 DTV transition wouldn't require you to buy new equipment.

True digital TV, on the other hand, is completely digital and involves:

You can see the difference in resolution in the next section.