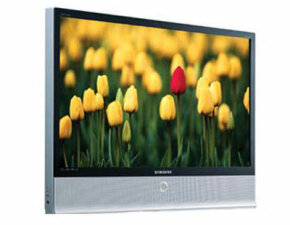 ­If yo­u walk into a store to look at TVs or search for one online, you will see that there are hundreds of options to choose from. You can get a traditional cathode ray tube (CRT) TV set, a rear projector, or a big-screen TV, in dozens of sizes, shapes and colors. Ranging in size from 37 inches to more than 80 inches, big-screen TVs come in several different styles:

­ DLP sets are usually lower in price than plasmas and LCDs, and they tend to have a better picture. As DLP technology improves, the benefits continue to increase. If you are looking for the most bang for your buck, then ­DLP sets are definitely an option.

In this article, we’ll see­ what’s in a DLP set that makes it work, how it’s different from other TVs, what it’s currently being used for and where it’s headed in the future. ­ 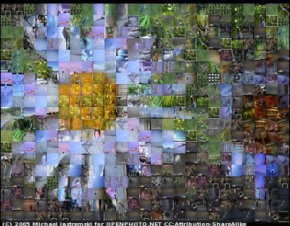 DLP technology is based on an optical semiconductor, called a Digital Micromirror Device (DMD), which uses mirrors made of aluminum to reflect light to make the picture. The DMD is often referred to as the DLP chip. The chip can be held in the palm of your hand, yet it can contain more than 2 million mirrors each, measuring less than one-fifth the width of a human hair. The mirrors are laid out in a matrix, much like a photo mosaic, with each mirror representing one pixel.

When you look closely at a photo mosaic, each piece of it holds a tiny, square photograph. As you step away from the mosaic, the images blend together to create one large image. The same concept applies to DMDs. If you look closely at a DMD, you would see tiny square mirrors that reflect light, instead of the tiny photographs. From far away (or when the light is projected on the screen), you would see a picture.

The number of mirrors corresponds to the resolution of the screen. DLP 1080p technology delivers more than 2 million pixels for true 1920x1080p resolution, the highest available.

In addition to the mirrors, the DMD unit includes:

A DMD chip is a micro electro-mechanical system (MEMS). MEMS devices combine microscopic machines with the same silicon used in a computer. See How Semiconductors Work for more information. 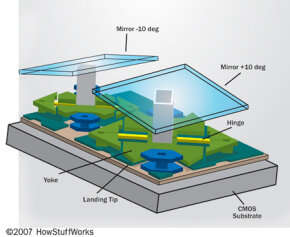 Before any of the mirrors switch to their on or off positions, the chip will rapidly decode a bit-streamed image code that enters through the semiconductor. It then converts the data from interlaced to progressive, allowing the picture to fade in. Next, the chip sizes the picture to fit the screen and makes any necessary adjustments to the picture, including brightness, sharpness and color quality. Finally, it relays all the information to the mirrors, completing the whole process in just 16 microseconds.

The mirrors are mounted on tiny hinges that enable them to tilt either toward the light source (ON) or away from it (OFF) up to +/- 12°, and as often as 5,000 times per second. When a mirror is switched on more than off, it creates a light gray pixel. Conversely, if a mirror is off more than on, the pixel will be a dark gray.

The light they reflect is directed through a lens and onto the screen, creating an image. The mirrors can reflect pixels in up to 1,024 shades of gray to convert the video or graphic signal entering the DLP into a highly detailed grayscale image. DLPs also produce the deepest black levels of any projection technology using mirrors always in the off position.

To add color to that image, the white light from the lamp passes through a transparent, spinning color wheel, and onto the DLP chip. The color wheel, synchronized with the chip, filters the light into red, green and blue. The on and off states of each mirror are coordinated with these three basic building blocks of color. A single chip DLP projection system can create 16.7 million colors.

Each pixel of light on the screen is red, green or blue at any given moment. The DLP technology relies on the viewer’s eyes to blend the pixels into the desired colors of the image. For example, a mirror responsible for creating a purple pixel will only reflect the red and blue light to the surface. The pixel itself is a rapidly, alternating flash of the blue and red light. Our eyes will blend these flashes in order to see the intended hue of the projected image.

A DLP Cinema projection system has three chips, each with its own color wheel that is capable of producing no fewer than 35 trillion colors. In a 3-chip system, the white light generated from the lamp passes through a prism that divides it into red, green and blue. Each chip is dedicated to one of these three colors. The colored light that the mirrors reflect is then combined and passes through the projection lens to form an image.

Once the DMD has created a picture out of the light and the color wheel has added color, the light passes through a lens. The lens projects the image onto the screen. 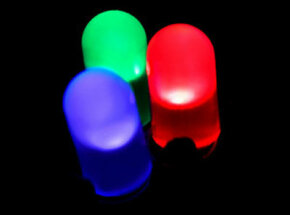 In the fast-paced world of improving technology, some manufacturers of the newer DLP TVs have replaced the color wheel, as well as the projection lamp, with light emitting diode (LED) technology to give a higher quality to the image on the screen. LED technology uses illuminated lights in red, green and blue to provide the color, as opposed to a color wheel. DLP is the only technology to use LED.

Some of the benefits include:

There are also many other differences between DLP and other types of TVs, that make DLP a higher-quality product. In a traditional CRT TV, there are three "guns," or tubes, that can become misaligned. This causes the image to go out of alignment and appear fuzzy. You would need to have a trained technician come in and realign the tubes to restore a clear picture.

DLP is also insusceptible to phosphor burn-in, which can occur in plasma and CRT TVs. Phosphor burn-in is a permanent disfigurement of areas on the screen caused by still images being displayed continuously for long periods. For example, if you leave the TV on a channel that has a logo constantly showing, you may still be able to see the shadow of that logo when you change the channel.

Another advantage of DLP is the reduction of the "screen door" effect, also known as pixilation. Pixilation occurs when fine lines separate the projector's pixels and they are visible in the projected image. Because the space between each DMD mirror is microscopic, it is virtually impossible for pixilation to be visible.

Newer DLP sets can now be mounted on the wall.
Photo courtesy of OptomaUSA

The structure of a DLP also makes it one of the most reliable TVs on the market. What keeps a DMD from breaking or falling apart? There are three major components that keep it together:

DLP sets are much more affordable than the other plasma and LCD sets. They also come in larger screen sizes, yet remain slim and lightweight. Newer models are as small as 7 inches. In 2007, DLP wall-mounted sets were introduced to compete with the plasma and LCD screens, which provide increased contrast performance beyond 100,000 to 1.

In February 1997, the Motion Picture Academy of Arts and Sciences chose DLP technology to project the Oscars, and it has been used ever since. In June 1998, DLP Products won an Emmy for outstanding achievement in Engineering from the Academy of Arts and Sciences. Dr. Hornbeck, the inventor of DLP technology, also received an Emmy. In October 2003, DLP Products received two Emmys for Technology and Engineering in consumer rear-projection TV. 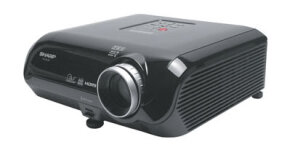 You've probably seen DLP technology and not realized it, because it's being adopted for use all over the world. Some current uses include:

DLP Cinema is also growing at a lightning-fast pace. It’s currently being rolled out to movie theaters all over the world with 1,943 screens in North America, 572 in Europe, 398 in Asia and 26 in Latin America, plus an additional 285 installed in screening rooms and post-production houses [Source: DLP.com]. In mid-2006, approximately 32,000 cinema systems conversions were announced for North America, including the purchase of 13,000 systems by National CineMedia, the joint venture owned by Regal Entertainment Group, AMC Entertainment Inc., and Cinemark USA.

There are numerous projects in the works for DLP technology. One project, 3D digital projection, is currently in the testing phase at some theaters around the country. Conventional 3D projection requires the use of two synchronized projectors, which increases costs and requires projectionists to have a lot of technical knowledge. DLP Cinema 3D projection would eliminate that because it only needs one projector. There are 182 DLP Cinema-equipped movie screens in North America presenting feature films in 3D. Carmike Cinemas has recently announced plans to convert 500 of their DLP Cinema screens for 3D projections.

However, there are other uses being developed for DLP beyond projection and TVs. Some other applications that could incorporate its high-definition image creation are:

­As time goes on, and the technology advances, scientists and developers are likely to discover even more uses for DMDs and DLP technology.

For lots more information on DLP televisions and other related topics, check out the links on the next page.

OMAP is a wireless technology from Texas Instruments, found in handset PDAs, portable data terminals, cell phones and other multimedia-enhanced devices. Using DLP and OMAP together, consumers can now use their wireless device to capture and store content, like digital movies, video games and TV shows. Then, they can watch the content with others via a connection to mobile, palm-sized DLP pocket projectors that are full featured, but weigh less than one pound. Thirty to fifty inch projected images are possible, giving mobile “big screen” entertainment.