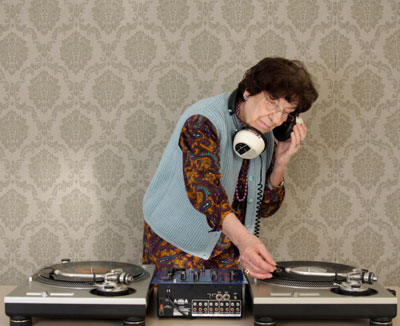 ­Are analog fans living in the past?
Dan Talson, iStockphoto

Sound is naturally an analog signal. An analog signal is continuous, meaning that there are no breaks or interruptions. One moment flows into the next. If you were to hum a descending note, people hearing you would be able to detect the change in pitch, but not point to specific moments when the pitch jumped from one note to the next.

Digital signals are not continuous. They use specific values to represent information. In the case of sound, that means representing a sound wave as a series of values that represent pitch and volume over the length of the recording. In a primitive digital recording of that descending note you hummed, you'd hear a single long sound as a collection of shorter sounds.

Some audiophiles argue that because analog recording methods are continuous, they are better at capturing a true representation of sound. Digital recordings can miss subtle nuances. But as digital recording processes improve, digital devices can use higher sampling rates with greater precision. Although the signal still isn't continuous, the high sampling rate can create a sound similar to the original source.

Before the 1970s, musicians recorded their performances on analog recording equipment. Microphones recording the sound generated an analog wave that other devices would then transfer directly to the proper media (usually magnetic tape). Assuming the recording artist used reliable equipment, the sound recorded was an accurate representation of the original sound.

With digital recording, audio engineers convert analog waves into digital signals. There are many different kinds of equipment that can convert analog to digital. Some audio studios record a performance on an analog master tape first, then transfer the sound to a digital format. Others will use special equipment to record directly to digital.

Early digital recordings sacrificed fidelity, or sound quality, in favor of reliability. One of the drawbacks of an analog format is that analog media tends to wear down. Vinyl albums can warp or get scratched, which can dramatically impact sound quality. Magnetic tape eventually wears out and is vulnerable to magnets, which can erase or destroy information stored on the tape. Digital media like compact discs can reproduce sound indefinitely.

Another advantage digital media has over analog is that you can make as many copies of the original sound file as you like without hurting it. Eventually, even an analog master recording isn't going to sound as good as the original performance. As long as nothing corrupts a digital file, it will stay the same no matter how much time has passed or how many copies engineers make.

Today, technology in the audio recording industry is so advanced that many audio engineers will tell you there's no detectable difference between analog and digital recordings. Even if you were to use the best stereo equipment, you shouldn't be able to identify one medium versus the other just by listening to the sound. Many audiophiles disagree and claim that the analog format is still supreme.

So what are the arguments that audiophiles use to support their love of the analog format? Find out in the next section.