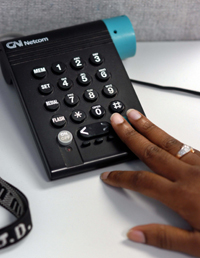 There are two basic options when choosing an autodialing service provider. You can either purchase all the equipment to run the system in-house or subscribe to a monthly hosting plan. There are several companies who offer both services. Here are a couple of representative providers.

Database Systems Corp (DSC) is a Phoenix-based company that supplies autodialing and IVR services to small and large clients across the United States. We spoke with a sales representative from DSC who gave us some quotes on both in-house and hosted autodialing systems.

Let’s use the example of a mass notification system for a school. The school wants to be able to contact 1,000 people with a 30-second recorded message in 25 minutes or less. If the school were to purchase the autodialing equipment and run the mass notification itself, it would need over 40 separate phone lines to send a 30-second message to that many people. According to DSC, this type of system would cost around $48,000.

Now let’s look at the same parameters with a hosted mass notification system. DSC charges a one-time setup fee of $250. The fee includes a toll-free number to record messages, reporting features and a Web interface for creating and managing phone number lists. It costs $25 a month to keep the account active five days a week, 16 hours a day. Or $50 to keep it active 24/7. When you actually use the service, DSC charges 15 cents for each phone number (includes three attempts) plus the cost of the call. So with the hosted system, the price varies greatly depending on how much you use the system, but could cost as little as around $1,200 a year if only used once and only used to make local calls.

At the low end, there’s a simple autodialer called Cheetah. You upload a list of phone numbers, press dial and it begins dialing one number at a time. If someone (or something) answers, then the call is connected to a live agent. If Cheetah encounters a busy signal or no answer, it moves on to the next number. The on-screen interface allows the operator to see information about the call and read any associated scripts. There’s also an option to play a recorded message if you reach an answering machine. Another nice feature is the ability to check uploaded phone lists against the National Do Not Call Registry. Cheetah costs $299 and works with only one phone line.

On the higher end is a software package called Piranha. Piranha is a predictive dialer for up to 24 different agents and phone lines. As a predictive dialer, it maximizes the amount of time that live agents are talking. This software includes some other features that you find with other high-end autodialing software:

The Piranha system starts at $1,500 for the basic software and $3,600 for an eight-line predictive dialer operated by two agents. The system maxes out at 72 phone lines being operated by 24 agents and costs close to $40,000.

For more information on autodialers and related topics, check out the links below.